A Cottage of Candles 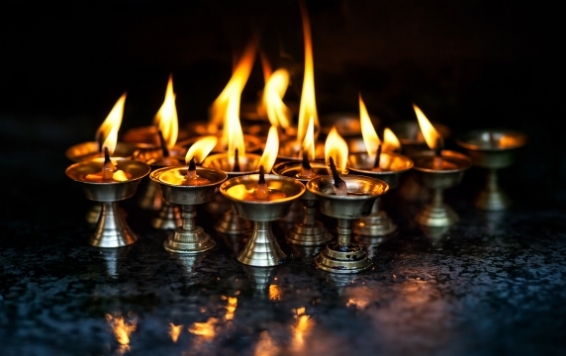 There was once a Jew who went out into the world to fulfill the Biblical command – “Tzedek tzedek tirdof – Justice, justice shall you pursue.” Somewhere, he was certain, true justice must exist, but he had never found it. So he set out on a quest that lasted for many years. He went from town to town and village to village, and everywhere he went, he searched for justice, but never did he find it.

The man went deeper and deeper into that forest, until at last he arrived at a little clay hut. Through the window he saw many flickering flames, and he was curious about them. So he went to the door and knocked. No answer. He knocked again. Nothing. At last he pushed the door open and stepped inside.

Now, as soon as he stepped inside that cottage, the man realized that it was much larger on the inside than it had seemed to be from the outside. It was filled with hundreds of shelves, and on every shelf there were dozens of oil candles. Some of those candles were in precious holders of gold or silver or marble, and some were in cheap holders of clay or tin. And some of the holders were filled with oil and the flames burned brightly, while others had very little oil left.

All at once an old man, with a long, white beard, wearing a white robe, appeared before him. “Shalom aleikhem, my son” the old man said. “How can I help you?” The man replied, “Aleikhem shalom. I have gone everywhere searching for justice, but never have I seen anything like this. Tell me, what are all these candles?”

The man asked, “Can you show me the candle of my soul?”

“Follow me,” the old man said, and he led him through that long labyrinth of a cottage, which the man now saw must be endless. At last they reached a low shelf, and there the old man pointed to a candle in a holder of clay and said, “That is the candle of your soul.”

Now the man took one look at that flickering candle, and a great fear fell upon him, for the wick of that candle was very short, and there was very little oil left, and it looked as if at any moment the wick would slide into the oil and sputter out. He began to tremble. Could the end could be so near without his knowing it? Then he noticed the candle next to his own, also in a clay holder, but that one was full of oil, and its wick was long and straight and its flame burned brightly. “And whose candle is that?” the man asked.

“I can only reveal each man’s candle to himself alone,” the old man said, and he turned and left.The man stood there, quaking. All at once he heard a sputtering sound, and when he looked up, he saw smoke rising from another shelf, and he knew that somewhere, someone was no longer among the living. He looked back at his own candle and saw that there were only a few drops of oil left. Then he looked again at the candle next to his own, so full of oil, and a terrible thought entered his mind.

He stepped back and searched for the old man in every corner of the cottage, but he didn’t see him anywhere. Then he picked up the candle next to his own and lifted it up above his own. At that instant the old man appeared out of nowhere and gripped his arm with a grip like iron. And the old man said: “Is this the kind of justice you are seeking?”

The man closed his eyes because it hurt so much. And when he opened his eyes, he saw that the old man was gone, and the cottage and the candles had all disappeared. And he found himself standing alone in the forest and he heard the trees whispering his fate.
– See more at: http://blog.oup.com/2006/09/a_lesson_for_yo/#sthash.xwcW5wt3.dpuf