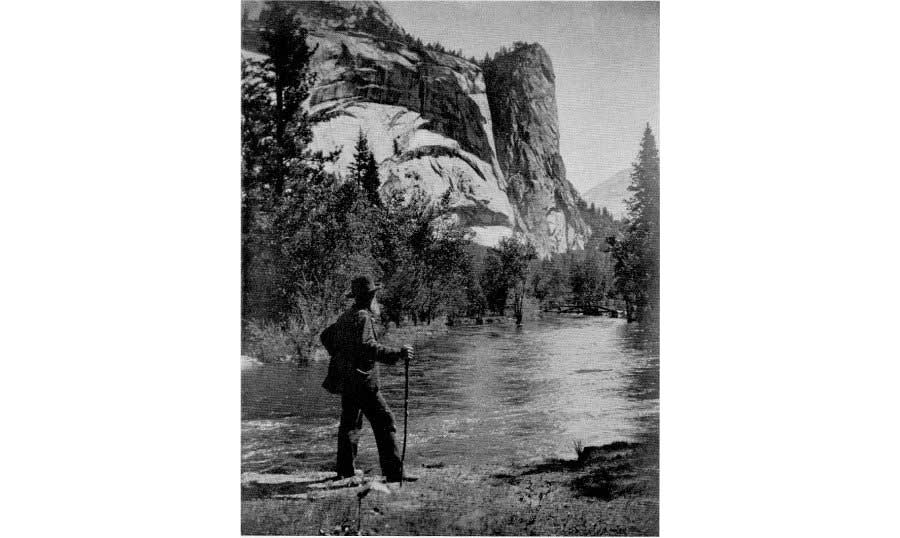 There are always some people in the mountains who are known as “hikers.” They rush over the trail at high speed and take great delight in being the first to reach camp and in covering the greatest number of miles in the least possible time. they measure the trail in terms of speed and distance.

One day as I was resting in the shade Mr. Muir overtook me on the trail and began to chat in that friendly way in which he delights to talk with everyone he meets. I said to him: “Mr. Muir, someone told me you did not approve of the word ‘hike.’ Is that so?” His blue eyes flashed, and with his Scotch accent he replied: “I don’t like either the word or the thing. People ought to saunter in the mountains – not hike!

“Do you know the origin of that word ‘saunter?’ It’s a beautiful word. Away back in the Middle Ages people used to go on pilgrimages to the Holy Land, and when people in the villages through which they passed asked where they were going, they would reply, “A la sainte terre,’ ‘To the Holy Land.’ And so they became known as sainte-terre-ers or saunterers. Now these mountains are our Holy Land, and we ought to saunter through them reverently, not ‘hike’ through them.”

John Muir lived up to his doctrine. He was usually the last man to reach camp. He never hurried. He stopped to get acquainted with individual trees along the way. He would hail people passing by and make them get down on hands and knees if necessary to see the beauty of some little bed of almost microscopic flowers. Usually he appeared at camp with some new flowers in his hat and a little piece of fir bough in his buttonhole.

Now, whether the derivation of saunter Muir gave me is scientific or fanciful, is there not in it another parable? There are people who “hike” through life. They measure life in terms of money and amusement; they rush along the trail of life feverishly seeking to make a dollar or gratify an appetite. How much better to “saunter” along this trail of life, to measure it in terms of beauty and love and friendship! How much finer to take time to know and understand the men and women along the way, to stop a while and let the beauty of the sunset possess the soul, to listen to what the trees are saying and the songs of the birds, and to gather the fragrant little flowers that bloom all along the trail of life for those who have eyes to see!

You can’t do these things if you rush through life in a big red automobile at high speed; you can’t know these things if you “hike” along the trail in a speed competition. These are the peculiar rewards of the man who has learned the secret of the saunterer!

John Muir (1838-1914) was a Scottish-American naturalist, author, environmental philosopher and early advocate for the preservation of wilderness in the United States. This story about him is from The Mountain Trail and Its Message (1911)  by Albert W. Palmer. We borrowed it from the Sierra Club, of which he was a founder and its first president.