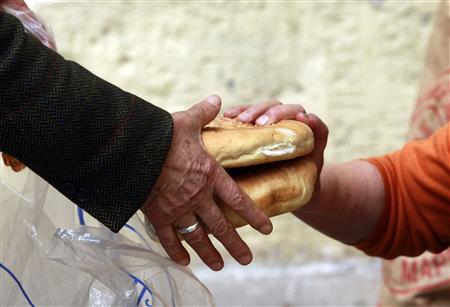 This way three days and night passed. Swami ji was so involved in talking to people about spiritual matters that he didn’t even took a break to eat of even drink a sip of water.

On third night on his stay after all visitors left, a poor man came to him and said, “Swami ji… I noticed that you have been answering all people from last two days and night and haven’t even taken a drop of water. This has pained me very much.”

Swami ji felt that in form of poor man, God had appeared before him and said, “Will you please give me something to eat??”

The poor man was a cobbler by profession and traditionally a person from a lower caste were even forbidden from coming near to a Brahman or Sanyasi. So the poor man hesitatingly asked, “Swami ji.. . I want to bake and bring some bread for you but I am from lower caste. How can you eat it if i have already touched it?”

Poor man asked, “Swami ji if you allow then I can bring you some ingredients to make food and then you can prepare them as you please!!”

Swami ji replied, “No. I shall be happy to eat whatever you bring for me to eat.”

Poor man was frightened and feared that people from higher castes might punish him for giving food to Sanyasi but he wanted to serve to Swami ji and hurriedly went back home and came back with some freshly baked bread.”

Swami ji was moved by the kindness and selfless love of poor man. Swami ji ate that bread and thanked poor man for his kindness.

In the meantime some high caste gentleman found that a lower class man had offered food to Swami ji and was accepted by him.

They went to Swami ji and questioned him about it and said that it was wrong of him to accept that food.

Swami ji listened to them patiently and replied, “You people made me talk without respite for the past three days but you did not even care to inquire if I had taken any food and rest.

You claim you are gentlemen and boast of your high caste! What is more shameful is you condemn this man for being of a low caste. Can you overlook the humanity he has just shown and despise him without feeling ashamed?”

Gentlemen felt ashamed about their behavior.