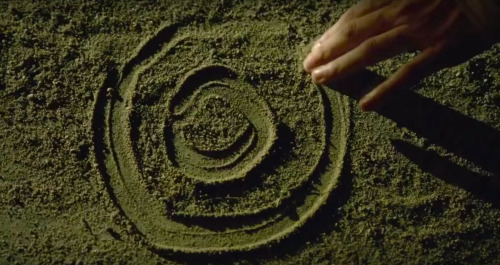 A foreign scholar and his entourage were passing through Aksehir. The scholar asked to speak with the town’s most knowledgeable person. Of course the townsfolk immediately called Nasreddin Hodja. The foreign savant didn’t speak Turkish and our Hodja didn’t speak any foreign languages, so the two wise men had to communicate with signs, while the others looked on with fascination.

The foreigner, using a stick, drew a large circle on the sand. Nasreddin Hodja took the stick and divided the circle into two. This time the foreigner drew a line perpendicular to the one Hodja drew and the circle was now split into four. He motioned to indicate first the three quarters of the circle, then the remaining quarter. To this, the Hodja made a swirling motion with the stick on the four quarters. Then the foreigner made a bowl shape with two hands side by side, palms up, and wiggled his fingers. Nasreddin Hodja responded by cupping his hands palms down and wiggling his fingers.

When the meeting was over, the members of the foreign scientist’s entourage asked him what they have talked about.

The people of Aksehir were also curious about how the encounter went. They gathered around the Hodja.