Barak Obama on The Empathy Deficit 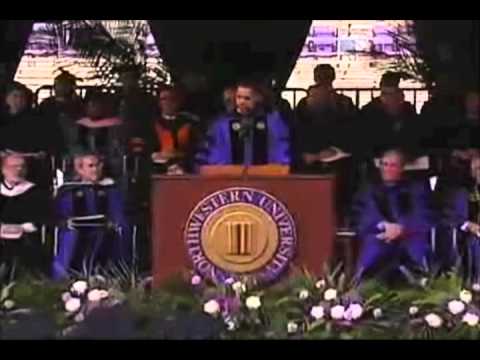 “There’s a lot of talk in this country about the federal deficit. But I think we should talk more about our empathy deficit — the ability to put ourselves in someone else’s shoes; to see the world through those who are different from us — the child who’s hungry, the laid-off steelworker, the immigrant woman cleaning your dorm room.

“As you go on in life, cultivating this quality of empathy will become harder, not easier. There’s no community service requirement in the real world; no one forcing you to care. You’ll be free to live in neighborhoods with people who are exactly like yourself, and send your kids to the same schools, and narrow your concerns to what’s going on in your own little circle.

“Not only that — we live in a culture that discourages empathy. A culture that too often tells us our principal goal in life is to be rich, thin, young, famous, safe, and entertained. A culture where those in power too often encourage these selfish impulses.

“They will tell you that the Americans who sleep in the streets and beg for food got there because they’re all lazy or weak of spirit. That the inner-city children who are trapped in dilapidated schools can’t learn and won’t learn and so we should just give up on them entirely. That the innocent people being slaughtered and expelled from their homes half a world away are somebody else’s problem to take care of.

“It’s because you have an obligation to yourself. Because our individual salvation depends on collective salvation. And because it’s only when you hitch your wagon to something larger than yourself that you will realize your true potential — and become full-grown.”

From a commencement speech at Northwestern University, 2006
http://www.northwestern.edu/observer/issues/2006/06/22/obama.html