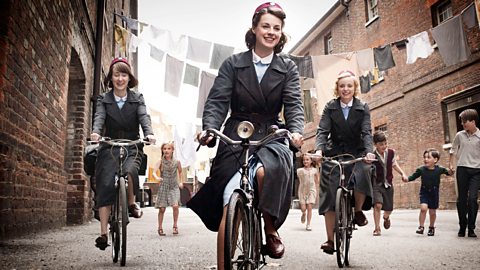 If you haven’t seen Call the Midwife — do. The plot follows newly-qualified midwife Jenny Lee and the nuns of a nursing convent coping with the medical problems in East London in the 1950s. This long, thoughtful review from the LA Review of Books, via Slate, illuminates how we view helping across class differences and is well worth reading in its entirety.

From the LA Review of Books:

“In our current era, when inequality between the haves and the have-nots flickers in and out of mainstream attention, perpetually unable to gain political traction, it’s perplexing that most American highbrow cultural productions are so bereft of actual poor people, arguably even more scarce than old broads in prime time. As income inequality increases in this country, and the well-to-do retreat into private neighborhoods, schools, and parks, we become increasingly reliant on reality TV shows like Here Comes Honey Boo Boo or Duck Dynasty to produce class difference as spectacle. These shows perform a version of so-called “white trash” culture that confirms our broadest stereotypes, often using the body to assign morality to class position (obesity, for example, functions as shorthand for a lack of self-discipline that explains class as individual failure).

“Call the Midwife performs an alternative version of reaching across difference, highly sentimental, yes, dependent on the rose-tinted glasses that filter out the fear and shame viewers might attach to poor people, and admittedly not so helpful when it comes to reforming the institutional drivers behind income inequality. This version hails from two gender-based models of charity: the settlement workers who performed charity through proximity and the nuns who practice service as self-sacrifice. But more so than those predecessors, the show’s model involves making connections through the messiness of the body, through farts and afterbirths and sex, rather than its transcendence. Such connections require a fundamental willingness to humble ourselves before others, acknowledging the limits of what we can know and stripping away the flimsy dignities we use as protection. Most importantly, they involve shifting our framework for understanding difference away from judgment and towards compassion, opening ourselves to the beauty in old bodies and the love and memory found even within decrepit buildings. These localized acts aren’t going to change the world, but the empathy and generosity they model might be a good place to start.”