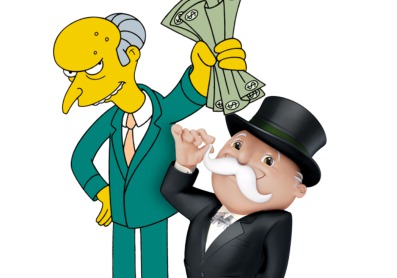 Rich people are meaner than poor people: a least that’s what researchers at UC Berkeley have found. In a series of fascinating — and scientifically rigorous — experiments they have demonstrated that wealth brings with it a sense of entitlement that somehow encourages rich people to literally take candy from a baby, cheat a dice games, and prods them to sneer at losers in a Monopoly game that is openly rigged in their favor. People with expensive cars are even less likely to stop for pedestrians in an intersection than are drivers with more modest wheels.

Here’s a video from the PBS New Hour that summarizes their findings (those of you who have watched “The Happy Movie” will recognize Dacher Keltner in this clip.)

I wonder why this is? One would think that the wealthy — who can afford to be generous — would be moreso than those just scraping by, but apparently it isn’t the way the world works. One theory is that the rich become rich because they are meaner and more apt to cheat. However, the studies suggest that even people just made to FEEL rich in the moment– in the rigged Monopoly game, for example— act the same way the really rich act. Hmm . . . is it easier for the poor to be compassionate?