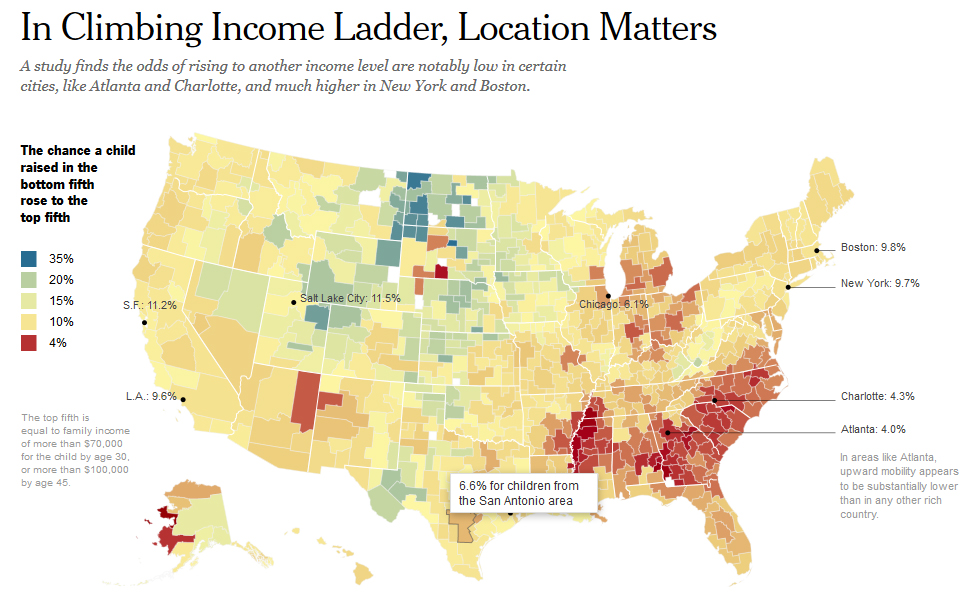 I’m a numbers nerd. Compassion is not just a matter of being nice It’s making sure that there is a safety net for our city’s most vulnerable citizens. It’s about infrastructure, and it can be measured. If you are a fan of the quantifiable — what I call compassion metrics — Compassionate San Antonio has a white paper on the topic. Here’s an example.

The Equality of Opportunity Project (www.equality-of-opportunity.org/ ) maps where children from low-income families are more likely to move up in the income distribution. Areas with greater mobility tend to have five characteristics: less segregation, less income inequality, better schools, greater social capital, and more stable families, the authors (economists from Harvard and UC-Berkeley) say.

The areas that did best (the top five are Salt Lake City, Pittsburgh, San Jose, Boston and San Francisco) had strong schools and good transportation, issues both at the top of the agenda in San Antonio. Both of these are tied to segregation: when poor people are isolated in communities with under-funded schools and poor transportation to good jobs, their children are much less likely to move up to the middle class.

The researchers also note that whether a child can rise to the middle class is quite clearly tied to explicit geographic and civic markers, not to personal characteristics of low-income families. Your children don’t succeed or fail because you’re lazy or stupid, but rather because they go to poorly performing schools and you live in an area where it takes two hours and three bus transfers to get to a decent job. They also note that these numbers have not changed all that much over the pat 40 years — so much for “the good old days.”