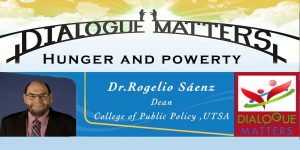 Dialogue Matters-Lecture Series is an intellectual educational program to promote education, exchange information, opinions and expertise, with a special focus on including as diverse range of viewpoints as possible.

Rogelio Sáenz is Dean of the College of Public Policy and holds the Mark G. Yudof Endowed Professorship at the University of Texas at San Antonio. He is also a Policy Fellow of the Carsey School of Public Policy at the University of New Hampshire. Sáenz has written extensively in the areas of demography, Latina/os, race and ethnic relations, inequality, immigration, public policy, social justice, and human rights.

He is the co-author of Latinos in the United States: Diversity and Change (Polity Press) and Latino Issues: A Reference Handbook (ABC-CLIO Press); he is also co-editor of The International Handbook of the Demography of Race and Ethnicity (Springer Press) as well as Latina/os in the United States: Changing the Face of América (Springer Press). Sáenz serves as associate editor of Social Problems. He has received various awards including the American Sociological Association Latino/a Sociology Section’s Founder Award (2013), the Southwestern Sociological Association’s Norma Williams Distinguished Service Award (2012), the American Sociological Association Latino/a Sociology Section’s Distinguished Contributions to Research and Scholarship (2005), and the American Association of Hispanics in Higher Education’s Outstanding Latino/a Faculty Award in Research and Teaching in Higher Education (2003).

He has also served as president of the Southwestern Social Science Association (2013-2014), chair of the Executive Council of the Inter-University Consortium for Political and Social Research (ICPSR) (2012-2014), vice president of the Rural Sociological Society (2002-2003), and president of the Southwestern Sociological Association (2000-2001). Sáenz regularly writes op-ed essays on current issues related to Latinos, demography, race, immigration, inequality, and politics with his contributions appearing in such newspapers as the Austin American-Statesman, El Paso Times, New York Times, and the San Antonio Express-News.

Dialog Institute of the Southwest