Fable: The Otter and the Jackal 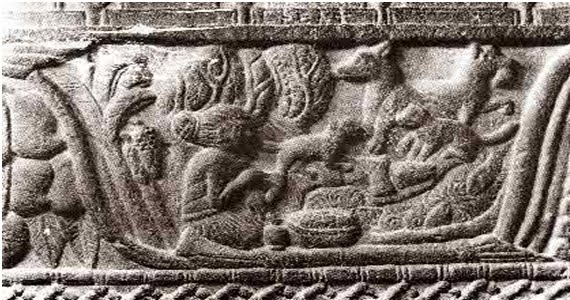 ONCE upon a time two Otters whose names were Gambhiracari and Anutiracari, were standing on the bank of a river, on the lookout for fish. Presently Gambhiracari saw a large Rohita fish, and with one bound he dived into the water and caught it by the tail.

It happened that this Rohita fish was very strong, and when it felt something grasping its tail, it dashed headlong down the river, dragging the Otter with it.
He called out to the other Otter, “Friend Anutiracari, this great fish will be enough of a meal for us both, but it is so strong that it is dragging me away.
Come and help me!”

The other Otter plunged in to his aid, and the two friends between them soon dragged out the Rohita fish, laid it on the bank of the river and killed it.
But now they began to say to each other, “You divide the fish,”—”No, you divide it!”—”No, you!”— and soon they quarrelled and could not decide how the fish should be divided between them.

At that moment a Jackal, named Mayavi, happened to pass the spot. Upon seeing him, both the otters saluted him and said, “Oh, Lord of the grey grass-colour, this fish was caught by both of us together; but a dispute has arisen between us, because we cannot decide how to divide. Will you kindly make a fair division for us?”
After hearing their request, the Jackal replied, “I have decided many a difficult case and done it peacefully. I will settle yours with equal fairness.”

So saying, he cut off the head and tail of the Rohita fish, gave the head to Gambhiracari and the tail to Anutiracari, and seizing the whole body of the fish, he ran away with it before their eyes, remarking as he went, “The best belongs to me, in payment for my trouble as umpire!”

The carving pictured above is said to be from a Buddhist stupa in Bharhut, central India (ca. 100-200BC) The woman/deity in the forefront (with a cooking pot) is observing how the otters deal with their bounty.