Father Ron Rolheiser: Christ’s call for true compassion is the goal of all religion 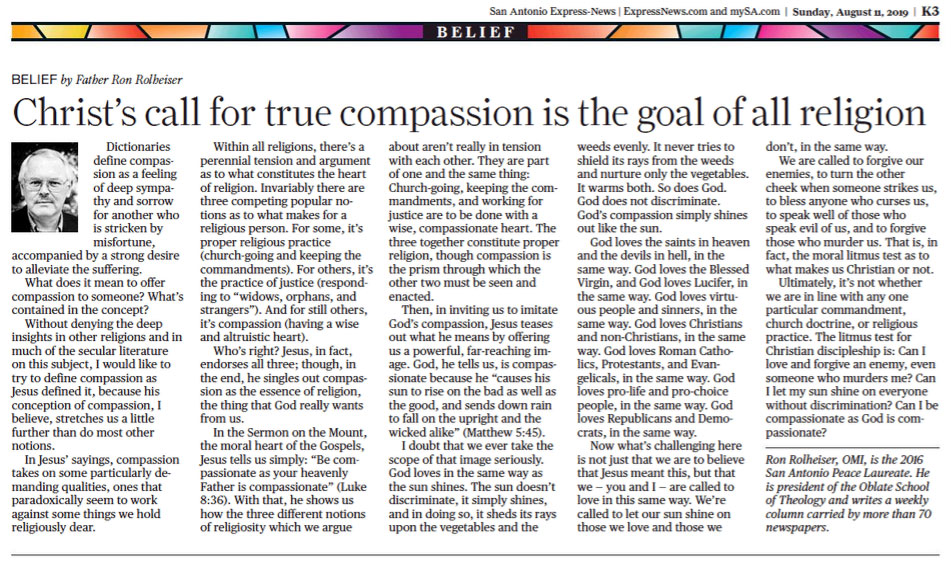 Dictionaries define compassion as a feeling of deep sympathy and sorrow for another who is stricken by misfortune, accompanied by a strong desire to alleviate the suffering.

What does it mean to offer compassion to someone? What’s contained in the concept?

Without denying the deep insights in other religions and in much of the secular literature on this subject, I would like to try to define compassion as Jesus defined it, because his conception of compassion, I believe, stretches us a little further than do most other notions.

In Jesus’ sayings, compassion takes on some particularly demanding qualities, ones that paradoxically seem to work against some things we hold religiously dear.

Within all religions, there’s a perennial tension and argument as to what constitutes the heart of religion. Invariably there are three competing popular notions as to what makes for a religious person. For some, it’s proper religious practice (church-going and keeping the commandments). For others, it’s the practice of justice (responding to “widows, orphans, and strangers”). And for still others, it’s compassion (having a wise and altruistic heart).

Who’s right? Jesus, in fact, endorses all three; though, in the end, he singles out compassion as the essence of religion, the thing that God really wants from us.

In the Sermon on the Mount, the moral heart of the Gospels, Jesus tells us simply: “Be compassionate as your heavenly Father is compassionate” (Luke 8:36). With that, he shows us how the three different notions of religiosity which we argue about aren’t really in tension with each other. They are part of one and the same thing: Church-going, keeping the commandments, and working for justice are to be done with a wise, compassionate heart. The three together constitute proper religion, though compassion is the prism through which the other two must be seen and enacted.

Then, in inviting us to imitate God’s compassion, Jesus teases out what he means by offering us a powerful, far-reaching image. God, he tells us, is compassionate because he “causes his sun to rise on the bad as well as the good, and sends down rain to fall on the upright and the wicked alike” (Matthew 5:45).

I doubt that we ever take the scope of that image seriously. God loves in the same way as the sun shines. The sun doesn’t discriminate, it simply shines, and in doing so, it sheds its rays upon the vegetables and the weeds evenly. It never tries to shield its rays from the weeds and nurture only the vegetables. It warms both. So does God. God does not discriminate. God’s compassion simply shines out like the sun.

Now what’s challenging here is not just that we are to believe that Jesus meant this, but that we — you and I — are called to love in this same way. We’re called to let our sun shine on those we love and those we don’t, in the same way.

We are called to forgive our enemies, to turn the other cheek when someone strikes us, to bless anyone who curses us, to speak well of those who speak evil of us, and to forgive those who murder us. That is, in fact, the moral litmus test as to what makes us Christian or not.

Ultimately, it’s not whether we are in line with any one particular commandment, church doctrine, or religious practice. The litmus test for Christian discipleship is: Can I love and forgive an enemy, even someone who murders me? Can I let my sun shine on everyone without discrimination? Can I be compassionate as God is compassionate?

Ron Rolheiser, OMI, is the 2016 San Antonio Peace Laureate. He is president of the Oblate School of Theology and writes a weekly column carried by more than 70 newspapers.