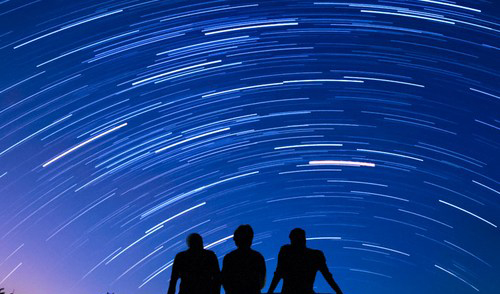 This is a Mullah Nasruddin story, from Turkey

My beloveds, I remember a time long ago when I was still a Mullah. I lived in a small town, just big enough for a real mosque, with a beautiful mosaic wall. I remember one evening, we had finished our prayers. The stars were clear and bright, and seemed to fill the sky solidly with lights. I stood at the window, gazing at the lights so far away, each one bigger than our world, and so distant from us across vast reaches of space.

I thought of how we walk this earth, filled with our own importance, when we are just specks of dust. If you walk out to the cliffs outside the town, a walk of half an hour at most, you look back and you can see the town, but the people are too small to see, even at that meager distance. When I think of the immensity of the universe, I am filled with awe and reverence for power so great.

I was thinking such thoughts, looking out the window of the mosque, and I realized I had fallen to my knees. “I am nothing, nothing!” I cried, amazed and awestruck.

There was a certain well-to-do man of the town, a kind man who wished to be thought very devout. He cared more for what people thought of him than for what he actually was. He happened to walk in and he saw and heard what passed. My beloveds, I was a little shy at being caught in such a moment, but he rushed down, looking around in the obvious hope someone was there to see him. He knelt beside me, and with a final hopeful glance at the door through which he had just come, he cried:

It appears that the man who sweeps, a poor man from the edge of the village, had entered the side door with his broom to begin his night’s work. He had seen us, and being a man of true faith and honest simplicity, his face showed that he entertained some of the same thoughts that had been laid on me by the hand of Allah (wonderful is He). He dropped his broom and fell to his knees up there in a shadowed corner, and said softly:

The well-to-do man next to me nudged me with his elbow and said out of the side of his mouth,

“Look who thinks he’s nothing!”