It’s Not All Golden: What Rules Do You Live By? 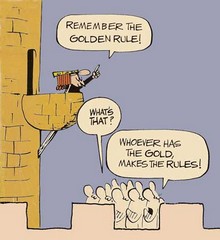 I’m one of those people who thinks that a lot of human behavior is governed by rules that are so ingrained we don’t even realize we are following rules and may not be able to articulate them once we do.

The Golden Rule, the underlying principle of the Charter for Compassion, suggests that we should “Treat others the way you wish to be treated yourself.” When we aren’t practicing the Golden Rule we are probably following a different rule. Some have even been given names:

Iron Rule: Do unto others before they do it to you

Brazen (Brass) Rule: Do good to others so that they will do good to you

Silver Rule: Do unto others as they do it to you

Rule of Gold: Whoever has the gold makes the rules, as described in this “Wizard of Id” cartoon

Stone(Age)Rule: Do unto others in any way that seems to serve your interests

Physicist Carl Sagan — host of the original “Cosmos” in the 1980s — wrote a chapter about these rules in “Billions and Billions: Thoughts on Life and Death at the End of the Millennium, ” the last book he wrote just before his death in 1996. He observed a couple of additional rules:

Finally, I should mention two other rules, found throughout the living world. They explain a great deal:

Suck up to those above you, and abuse those below. This is the motto of bullies and the norm in many nonhuman primate societies. It’s really the Golden Rule for superiors, the Iron Rule for inferiors. Since there is no known alloy of gold and iron, we’ll call it the Tin Rule for its flexibility.

The other common rule is: Give precedence in all things to close relatives, and do as you like to others. This Nepotism Rule is known to evolutionary biologists as “kin selection.”

Although Sagan doesn’t give it a catchy name, I’ll propose that last one could be called the Rule of Blood.

Here’s a exercise we lead at the peaceCENTER. When you read the newspaper today — or perhaps when you’re reading a novel or watching a film — keep these rules by your side and try to figure out which rules the characters are following. It’s enlightening. How would the scenario change if the Golden Rule was being followed?