Merton’s Epiphany: Overwhelmed with the realization that I loved all these people . . . 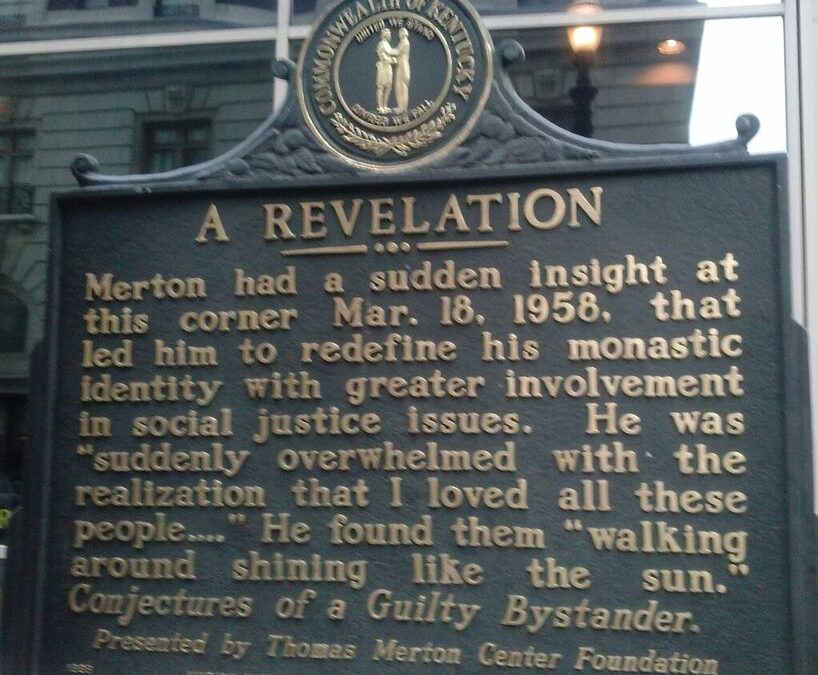 The peaceCENTER’s Ann Helmke and Susan Ives just returned from a week in Louisville, attending the International Summit on Compassionate Organizations, Louisville’s annual Festival of Faith, including a talk by the Dalai Lama. Thomas Merton is Louisville’s adopted son (he lived in the hermitage at Gethsemane, about 40 miles south) and this marker commemorates his “epiphany.” Merton wrote of this moment:

In Louisville, at the corner of Fourth and Walnut, in the center of the shopping district, I was suddenly overwhelmed with the realization that I loved all those people, that they were mine and I theirs, that we could not be alien to one another even though we were total strangers. It was like waking from a dream of separateness, of spurious self-isolation in a special world, the world of renunciation and supposed holiness. The whole illusion of a separate holy existence is a dream. Not that I question the reality of my vocation, or of my monastic life: but the conception of “separation from the world” that we have in the monastery too easily presents itself as a complete illusion: the illusion that by making vows we become a different species of being, pseudo-angels, “spiritual men,” men of interior life, what have you.

Certainly these traditional values are very real, but their reality is not of an order outside everyday existence in a contingent world, nor does it entitle one to despise the secular: though “out of the world,” we are in the same world as everybody else, the world of the bomb, the world of race hatred, the world of technology, the world of mass media, big business, revolution, and all the rest. We take a different attitude to all these things, for we belong to God. Yet so does everybody else belong to God. We just happen to be conscious of it, and to make a profession out of this consciousness. But does that entitle us to consider ourselves different, or even better, than others? The whole idea is preposterous.

This sense of liberation from an illusory difference was such a relief and such a joy to me that I almost laughed out loud. And I suppose my happiness could have taken form in the words: “Thank God, thank God that I am like other men, that I am only a man among others.” To think that for sixteen or seventeen years I have been taking seriously this pure illusion that is implicit in so much of our monastic thinking.

I have the immense joy of being man, a member of a race in which God Himself became incarnate. As if the sorrows and stupidities of the human condition could overwhelm me, now that I realize what we all are. And if only everybody could realize this! But it cannot be explained. There is no way of telling people that they are all walking around shining like the sun.

This changes nothing in the sense and value of my solitude, for it is in fact the function of solitude to make one realize such things with a clarity that would be impossible to anyone completely immersed in the other cares, the other illusions, and all the automatisms of a tightly collective existence. My solitude, however, is not my own, for I see now how much it belongs to them — and that I have a responsibility for it in their regard, not just in my own. It is because I am one with them that I owe it to them to be alone, and when I am alone, they are not “they” but my own self. There are no strangers!

Then it was as if I suddenly saw the secret beauty of their hearts, the depths of their hearts where neither sin nor desire nor self-knowledge can reach, the core of their reality, the person that each one is in God’s eyes. If only they could all see themselves as they really are. If only we could see each other that way all the time. There would be no more war, no more hatred, no more cruelty, no more greed…I suppose the big problem would be that we would fall down and worship each other. But this cannot be seen,