NEWS: S.A. can count its blessings as toxic waste flows from D.C. 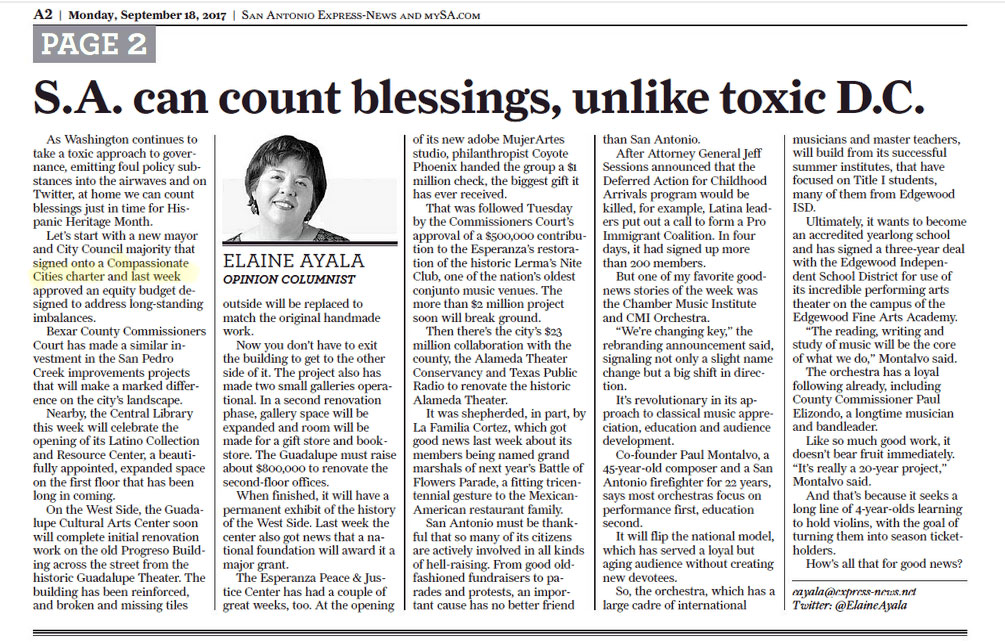 As Washington continues to take a toxic approach to governance, emitting foul policy substances into the airwaves and on Twitter, at home we can count blessings just in time for Hispanic Heritage Month.

Let’s start with a new mayor and City Council majority that signed onto a Compassionate Cities charter and last week approved an equity budget designed to address long-standing imbalances.

Bexar County Commissioners Court has made a similar investment in the San Pedro Creek improvements projects that will make a marked difference on the city’s landscape.

Nearby, the Central Library this week will celebrate the opening of its Latino Collection and Resource Center, a beautifully appointed, expanded space on the first floor that has been long in coming.

On the West Side, the Guadalupe Cultural Arts Center soon will complete initial renovation work on the old Progreso Building across the street from the historic Guadalupe Theater. The building has been reinforced, and broken and missing tiles outside will be replaced to match the original handmade work.

Now you don’t have to exit the building to get to the other side of it. The project also has made two small galleries operational. In a second renovation phase, gallery space will be expanded and room will be made for a gift store and bookstore. The Guadalupe must raise about $800,000 to renovate the second-floor offices.

When finished, it will have a permanent exhibit of the history of the West Side. Last week the center also got news that a national foundation will award it a major grant.

The Esperanza Peace & Justice Center has had a couple of great weeks, too. At the opening of its new adobe MujerArtes studio, philanthropist Coyote Phoenix handed the group a $1 million check, the biggest gift it has ever received.

That was followed Tuesday by the Commissioners Court’s approval of a $500,000 contribution to the Esperanza’s restoration of the historic Lerma’s Nite Club, one of the nation’s oldest conjunto music venues. The more than $2 million project soon will break ground.

Then there’s the city’s $23 million collaboration with the county, the Alameda Theater Conservancy and Texas Public Radio to renovate the historic Alameda Theater.

It was shepherded, in part, by La Familia Cortez, which got good news last week about its members being named grand marshals of next year’s Battle of Flowers Parade, a fitting tricentennial gesture to the Mexican-American restaurant family.

San Antonio must be thankful that so many of its citizens are actively involved in all kinds of hell-raising. From good old-fashioned fundraisers to parades and protests, an important cause has no better friend than San Antonio.

After Attorney General Jeff Sessions announced that the Deferred Action for Childhood Arrivals program would be killed, for example, Latina leaders put out a call to form a Pro Immigrant Coalition. In four days, it had signed up more than 200 members.

But one of my favorite good-news stories of the week was the Chamber Music Institute and CMI Orchestra.

“We’re changing key,” the rebranding announcement said, signaling not only a slight name change but a big shift in direction.

It’s revolutionary in its approach to classical music appreciation, education and audience development.

It will flip the national model, which has served a loyal but aging audience without creating new devotees.

So, the orchestra, which has a large cadre of international musicians and master teachers, will build from its successful summer institutes, that have focused on Title I students, many of them from Edgewood ISD.

Ultimately, it wants to become an accredited yearlong school and has signed a three-year deal with the Edgewood Independent School District for use of its incredible performing arts theater on the campus of the Edgewood Fine Arts Academy.

“The reading, writing and study of music will be the core of what we do,” Montalvo said.

The orchestra has a loyal following already, including County Commissioner Paul Elizondo, a longtime musician and bandleader.

And that’s because it seeks a long line of 4-year-olds learning to hold violins, with the goal of turning them into season ticket-holders.

How’s all that for good news?