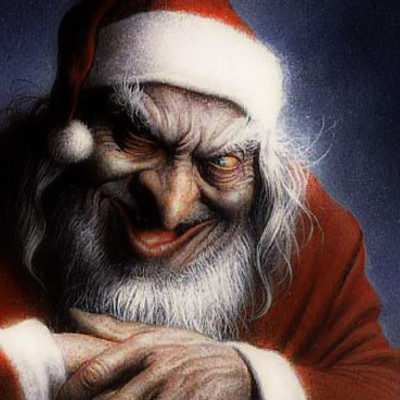 Somewhere on his travels the strange child
Picked up with this overstuffed confidence man,
Affection’s inverted thief, who climbs at night
Down chimneys into dreams, with this world’s goods,
Bringing all the benevolence of money,
He teaches the innocent to want, thus keeps
Our fat world rolling. His prescribed costume,
White flannel beard, red belly of cotton waste,
Conceals the thinness of essential hunger,
An appetite that feeds on satisfaction;
Or, pregnant with possessions, he brings forth
Vanity and the void. His name itself
is corrupted, and even Saint Nicholas, in his turn,
Gives off a faint and reminiscent stench,
The merest soupcon, of brimstone and the pit.

Now, at the season when the Child is born
To suffer for the world, suffer the world,
His bloated Other, jovial satellite
And Sycophant, makes his appearance also
In a glitter of goodies, in a rock candy glare.
Played at the better stores by bums, for money,
This annual savior of the economy
Speaks in the parables of the dollar sign:
Suffer the little children to come to Him.

At Easter, he’s anonymous again,
Just one of the crowd lunching on Calvary.