Poem: “The Courtesy of the Blind,” by Wisława Szymborska 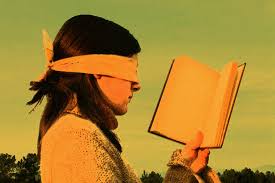 The poet reads his lines to the blind.
He hadn’t guessed that it would be so hard.
His voice trembles.
His hands shake.

He senses that every sentence
is put to the test of darkness.
He must muddle through alone,
without colors or lights.

A treacherous endeavor
for his poems’ stars,
dawns, rainbows, clouds, their neon lights, their moon,
for the fish so silvery thus far beneath the water
and the hawk so high and quiet in the sky.

He reads—since it’s too late to stop now—
about the boy in a yellow jacket on a green field,
red roofs that can be counted in the valley,
the restless numbers on soccer players’ shirts,
and the naked stranger standing in a half-shut door.

He’d like to skip—although it can’t be done—
all the saints on that cathedral ceiling,
the parting wave from a train,
the microscope lens, the ring casting a glow,
the movie screens, the mirrors, the photo albums.

But great is the courtesy of the blind,
great is their forbearance, their largesse.
They listen, smile, and applaud.

One of them even comes up
with a book turned wrongside out
asking for an unseen autograph.