Poorest among us have so little, yet they give so much 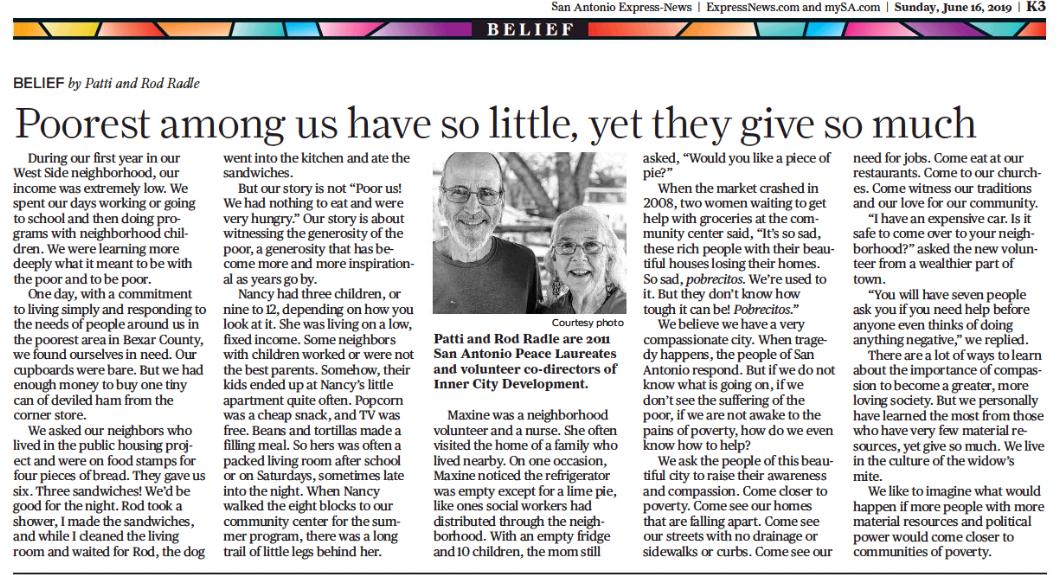 During our first year in our West Side neighborhood, our income was extremely low. We spent our days working or going to school and then doing programs with neighborhood children. We were learning more deeply what it meant to be with the poor and to be poor.

One day, with a commitment to living simply and responding to the needs of people around us in the poorest area in Bexar County, we found ourselves in need. Our cupboards were bare. But we had enough money to buy one tiny can of deviled ham from the corner store.

We asked our neighbors who lived in the public housing project and were on food stamps for four pieces of bread. They gave us

six. Three sandwiches! We’d be good for the night. Rod took a shower, I made the sandwiches, and while I cleaned the living room and waited for Rod, the dog went into the kitchen and ate the sandwiches.

But our story is not “Poor us! We had nothing to eat and were very hungry.” Our story is about witnessing the generosity of the poor, a generosity that has become more and more inspirational as years go by.

Nancy had three children, or nine to 12, depending on how you look at it. She was living on a low, fixed income. Some neighbors with children worked or were not the best parents. Somehow, their kids ended up at Nancy’s little apartment quite often. Popcorn was a cheap snack, and TV was free. Beans and tortillas made a filling meal. So hers was often a packed living room after school or on Saturdays, sometimes late into the night. When Nancy walked the eight blocks to our community center for the summer program, there was a long trail of little legs behind her.

Maxine was a neighborhood volunteer and a nurse. She often visited the home of a family who lived nearby. On one occasion, Maxine noticed the refrigerator was empty except for a lime pie, like ones social workers had distributed through the neighborhood. With an empty fridge and 10 children, the mom still asked, “Would you like a piece of pie?”

When the market crashed in 2008, two women waiting to get help with groceries at the community center said, “It’s so sad, these rich people with their beautiful houses losing their homes. So sad, pobrecitos. We’re used to it. But they don’t know how tough it can be! Pobrecitos.”

We believe we have a very compassionate city. When tragedy happens, the people of San Antonio respond. But if we do not know what is going on, if we don’t see the suffering of the poor, if we are not awake to the pains of poverty, how do we even know how to help?

We ask the people of this beautiful city to raise their awareness and compassion. Come closer to poverty. Come see our homes that are falling apart. Come see our streets with no drainage or sidewalks or curbs. Come see our need for jobs. Come eat at our restaurants. Come to our churches. Come witness our traditions and our love for our community.

“I have an expensive car. Is it safe to come over to your neighborhood?” asked the new volunteer from a wealthier part of town.

“You will have seven people ask you if you need help before anyone even thinks of doing anything negative,” we replied.

There are a lot of ways to learn about the importance of compassion to become a greater, more loving society. But we personally have learned the most from those who have very few material resources, yet give so much. We live in the culture of the widow’s mite.

We like to imagine what would happen if more people with more material resources and political power would come closer to communities of poverty.