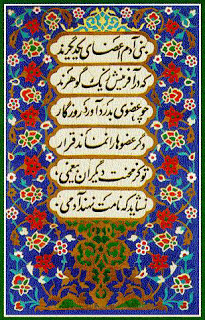 In a certain year I was sitting retired in the great mosque at Damascus, at the head of the tomb of Yahiya the prophet (on whom be peace!). One of the kings of Arabia, who was notorious for his injustice, happened to come on a pilgrimage, and having performed his devotions, he uttered the following words: “The poor and the rich are servants of this earth, and those who are richest have the greatest wants.” He then looked towards me, and said, “Because dervishes are strenuous and sincere in their commerce with heaven, unite your prayers with mine, for I am in dread of a powerful enemy.”

I replied, “Show mercy to the weak peasant, that you may not experience difficulty from a strong enemy. It is criminal to crush the poor and defenseless subjects with the arm of power. He liveth in dread who befriendeth not the poor; for should his foot slip, no one layeth hold of his hand. Whosoever soweth bad seed, and looketh for good fruit, tortureth his imagination in vain, making a false judgment of things. Take the cotton out of thine ear, and distribute justice to mankind; for if thou refusest justice, there will be a day of retribution.

“The children of Adam are limbs of one another, and are all produced from the same substance; when the world gives pain to one member, the others also suffer uneasiness. Thou who are indifferent to the sufferings of others deservest not to be called a man.”

Abū Muṣliḥ bin Abdallāh Shīrāzī, known by the pen name Sa’adi, was a Persian poet, c. 1184-1291. In the unsettled conditions following the Mongol invasion of Iran, he wandered through Anatolia, Syria, Egypt, Iraq, India and Central Asia. For thirty years he sat in remote teahouses late into the night and exchanged views with merchants, farmers, preachers, wayfarers, thieves, and Sufi mendicants, preaching, advising, learning, honing his sermons, and polishing them into gems illuminating the wisdom and foibles of his people. He had many western admirers: Pushkin, Goethe and Emerson quoted him.

A poem by Sa’adi is carved into the entrance of the Hall of Nations in the UN building in New York (pictured above):

Human beings are members of a whole,
In creation of one essence and soul.
If one member is afflicted with pain,
Other members uneasy will remain.
If you have no sympathy for human pain,
The name of human you cannot retain.