The Bell of Justice 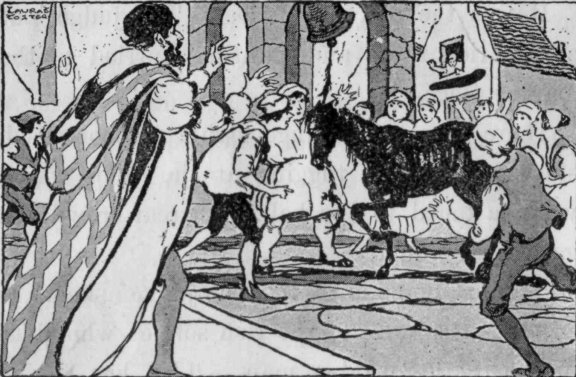 In the days of King John of Acre a bell was hung for anyone to ring who had received a great wrong, whereupon the king would call together the wise men appointed for this purpose, in order that justice might be done.

It happened that the bell had lasted a long time and the rope had wasted, so that a vine clung to it.

Now it befell that a knight of Acre had a noble charger which had grown old, so that it had lost its worth, and the knight, to avoid the expense of its keep, let it wander about. The famished horse tugged at the vine to eat it. As it tugged, the bell rang.

The judges assembled, and understood the petition of the horse who, it seemed, asked for justice. They sentenced that the knight whom the horse had served when it was young, should feed it now that it was old. The king commanded him to do so under grave penalties.

This story is from “The Hundred Old Tales,” compiled by an anonymous writer (probably a court minstrel) toward the end of the thirteenth century. The collection was first published in 1525. Longfellow retells the tale in his “Tales of a Wayside Inn,” (1915) placing the bell in Atri, in Italy. It is also retold in “Legends of the Rhine,” (1899), as having originated in Eckhardtsberg near Breisach.