Blind Men and the Elephant 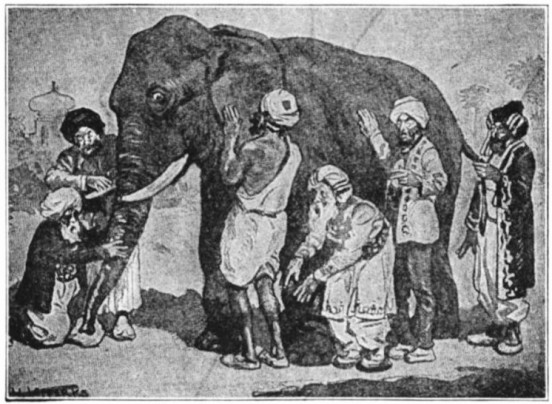 In a distant village, a long time ago, there lived six blind men. One day the villagers announced, “Hey, there is an elephant in the village today.”

They had never seen or felt an elephant before and so decided, “Even though we would not be able to see it, let us go and feel it anyway.” And thus they went down to the village to touch and feel the elephant to learn what animal this was and they described it as follows:

“Hey, the elephant is a pillar,” said the first man who touched his leg.

“Oh, no! it is like a rope,” argued the second after touching the tail.

“Oh, no! it is like a thick branch of a tree,” the third man spouted after touching the trunk.

“It is like a big hand fan” said the fourth man feeling the ear.

“It is like a huge wall,” sounded the fifth man who groped the belly.

“It is like a solid pipe,” Said the sixth man with the tusk in his hand.

They all fell into heated argument as to who was right in describing the big beast, all sticking to their own perception. A wise sage happened to hear the argument, stopped and asked them “What is the matter?” They said, “We cannot agree to what the elephant is like.”