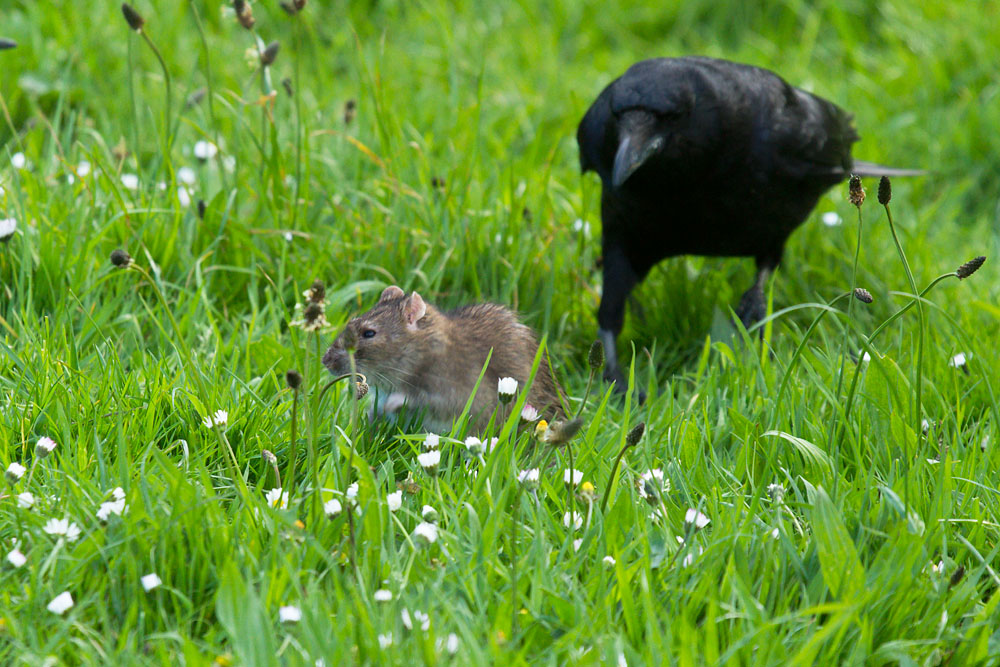 This Indian folk tale is attributed to Vishnu Sharma, who is believed to have written the Panchatantra collection of fables sometime between 1200 BCE to 300 CE.

After he saw how Hiranyaka had helped Chitragriva, Lagupatanaka came down from his tree perch and called out the rat in a voice resembling that of Chitragriva. The rat thought, “What happened? Did I forget to free any bird? The dove king must be calling me for the same purpose.”

Not sure who was calling him, the rat shouted from inside his fort, “Who are you?”

“I am Laghupatanaka, the crow.”

The rat further retreated into his fort and said, “Go away at once, I don’t know who you are.”

“I have come on an important business. Why don’t you meet me?”

“What do I gain by meeting you?”

“Sir, I have seen you liberating Chitragriva and his retinue. I thought friendship with you would be useful in such a crisis. I am seeking your hand.”

“Very odd! You are the diner and I am the dinner. How can there be amity between the two? Where there is enmity, there cannot be friendship. Didn’t you hear the elders say:

Friendship or marriage is always
between equals in caste and wealth.
There cannot be any sort of bond
between the weak and the strong.

“He who seeks friendship with someone who is not an equal will earn ridicule. So, please go.”

The crow replied, “Hiranyaka, I am waiting here at your doorstep. If you reject my hand, I will starve here to death.”

“But friendship with you is not possible. However hot the water, it still kills the fire.”

“We haven’t even seen each other. How can there be enmity between both of us?”

Hiranyaka then explained, “Enmity is of two kinds. The first is natural and the second is artificial. The second kind disappears when what caused it disappears. But natural enmity ends only with the death of one of the two enemies.”

“Can you make it clearer”, asked Laghupatanaka.

“Yes, artificial enmity is always based on some reason. Natural enmity is like the one between a snake and a mongoose, water and fire, Devatas and Rakshasas, dogs and cats, the rich and the poor, the learned and the illiterate, between women of virtue and vice.”

The crow then pleaded, “Sir, what you say is unreasonable. There is always a reason behind friendship and enmity. That is why a wise man should always seek friendship and not enmity.”

“True, it is foolish to think that you will not come to harm because you are a man of character. People who are blinded by ignorance and anger do not consider your character,” said the rat.

“Friendship with bad men is like a pot of clay easy to break but difficult to rejoin. With good men it is like pot of gold, difficult to break but easy to mend. I pledge that you will have no reason to fear danger from me,” said the crow.

Hiranyaka said, “I have no faith in pledges. don’t trust an enemy with whom you have made peace. Even if the hole is small, water seeping through it can sink a ship.

Don’t trust a person untrustworthy
Faith has its own limits
The evil that trust brings
Leaves you totally destroyed
Him who is highly skeptical
The mighty cannot put an end to
Him who trusts others easily
Even the weakest can kill.