The Frog and the Rat 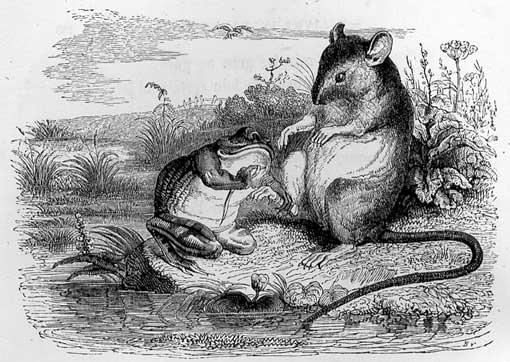 Merlin said well, that those who often cheat
Will sometimes cheat themselves — the phrase is old.
I’m sorry that it is, I must repeat,
It’s full of energy, and sound as gold.

But to my story: Once a well fed rat,
Rotund and wealthy, plump and fat,
Not knowing either Fast or Lent,
Lounging beside a marsh pool went.

A frog addressed him in the frog’s own tongue,
And asked him home to dinner civilly.
No need to make the invitation long.
He spoke, however, of the things he’d see:
The pleasant bath, worth curiosity;
The novelties along the marsh’s shore,
The score and score
Of spots of beauty, manners of the races,
The government of various places,
Some day he would recount with glee
Unto his youthful progeny.

One thing alone the gallant vexed,
And his adventurous soul perplexed;
He swam but little, and he needed aid.

The friendly frog was undismayed;
His paw to hers she strongly tied,
And then they started side by side.

The hostess towed her frightened guest
Quick to the bottom of the lake —
Perfidious breach of law of nations —
All promises she faithless breaks,
And sinks her friend to make fresh rations.
Already did her appetite
Dwell on the morsel with delight,
Lunch,
Scrunch!

He prays the gods; she mocks his woe;
He struggles up; she pulls below.

And while this combat is fought out,
A kite that’s seeking all about
Sees the poor rat that’s like to drown;
And pounces swift as lightning down.

The frog tied to him, by the way,
Also became the glad kite’s prey;
They gave him all that he could wish,
A supper both of meat and fish.

So oftentimes a base deceit
Falls back upon the father cheat;
So oftentimes doth perfidy
Return with triple usury.