The Ingratitude of Man 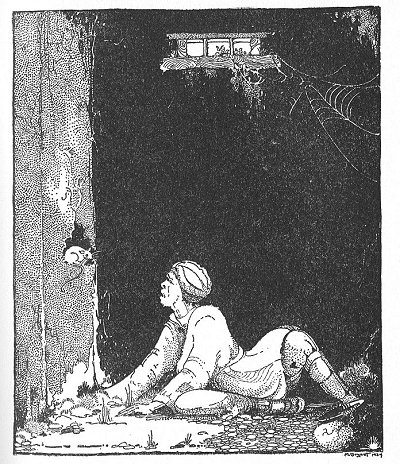 Whatever you have promised make it not as changeable as a loop in a string, but as firm as a line on a rock.
Tibetan Proverb.

ONCE upon a time in a far, far away land, in a very high, high land, when the old world was very, very young and animals and men spoke and lived together, such a thing as gratitude was known.

Away in the mountains was a narrow road that passed along the side of a deep chasm. It was a dangerous place to travel, and along this path one night, just at dark, when a man, a crow, a rat and a snake were walking along together, a part of the road gave way and they fell into the depths below. They were not hurt, but much shaken, and they sat there waiting and thinking of their plight, wondering how they could get out, or what they could do to keep from starving, when a traveler coming along reached the broken road and looked down and saw them.

They all at one time began to clamor and beg to be helped out, so he threw a long rope down to them and drew them all out one after the other. They all professed great gratitude and said they would never forget him and never forget the help he had given them, and that some time they’d help him. The traveler, in his heart, rather scorned the professions of friendship from the crow, the rat and the snake, and really didn’t believe they could do anything for him, but thought possibly the man might be able to aid him some time.

A long time after this had taken place, in the palace of the king, in this far away country, the queen was on the top of the flat roof washing her hair. She took off her jeweled necklace and laid it down near her on a low bench, and when her hair was dry went downstairs and forgot her jewels. Near by in the top of a tree sat the crow who had been rescued by the man a long time ago. He saw the necklace and said, “This will be a good present to give to that man who saved me from the chasm,” so he flew down, picked it up in his bill, flew away with it and took it to the man and told him where he got it.

The next day the traveler with the necklace met the man he had rescued and said, “Look here. I didn’t think that crow would be much of a friend, but see, he has brought me these magnificent jewels that belong to the queen.”

The rescued man, hearing this, went at once to the king and said to him, “The queen’s necklace you will find in the house of such a man,” and gave the name of his rescuer. The king at once sent his men, arrested the traveler and cast him into prison. In that dark old dungeon, with no bed to lie on, the walls dripping moisture, no food to eat, and no friend to bring him any, he was about to starve to death, when the rat he had rescued and who lived there came and asked him how he happened to be in that place. He related the story of his arrest and the ingratitude of the man he had saved and said he was about to starve and would surely die unless help came very soon. The rat went away, entered into the king’s palace, stole the food from his table, carried it to the man in the dungeon and saved him.

Another day the snake came in to see him and asked how it was that he happened to be in the prison. He told him the story again and the snake said, “Never mind, I’ll get you free.”

Now this snake was a magic snake, and making himself into a ghost wound around and around the king’s neck and almost choked him to death. He could be felt but not seen. The king wildly called for his great men, his wise men and his lamas who cast lots and told him that this ghost that was choking him was one of the patron saints of the man in the prison, and if he would loose the prisoner and treat him kindly, his troubles would cease. So he called for the prisoner to be brought before him, gave him much money and many jewels and sent him away speedily.

The king’s misery stopped and the traveler was made happy by the friendship of the three whom he had doubted and scorned.