The King of Compassion 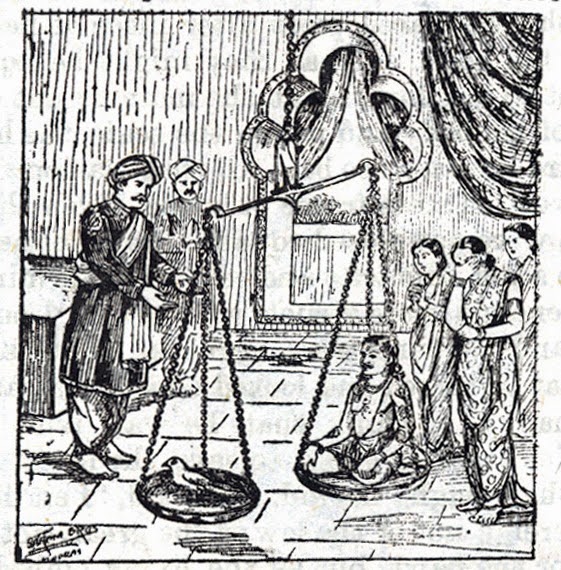 Once upon a time there was a great king who ruled his people with generosity and kindness. He showed compassion for everything, for all the birds and animals and for every person, young and old. He also honored the gods. So good was the king that every living creature from far and near came to his palace to seek his protection and advice. He smiled upon everyone who came and never turned anyone away.

The gods in the heavens watched the king day and night. They spoke of him often, amazed by his goodness.

“I wonder,” said Indra, “if we ought to test the king to see how far his goodness spreads.”

“Yes,” said Dharma, “that would be wise. It is difficult to believe that he is as good as he seems.”

The two gods formed a plan. Indra turned himself into a large black hawk. Dharma took the shape of a white dove. “Let us begin,” said Indra the hawk, and Dharma the dove began to fly toward the palace. Indra gave chase.

On they flew, through the bright autumn sky, the hawk chasing the dove.

People down below looked up to see the defenseless dove flying as fast as he could, the fierce hawk close upon him.

“Fly to the king,” the people shouted to the dove. Heeding their words with a nod, Dharma flew straight toward the palace. Spying an open window, he flew inside, directly to the room where the king sat holding counsel with his advisers.

The dove landed in the compassionate king’s arms and nestled there, shivering with fear.

A moment later the great hawk flew through the window and alighted on the table before the king.

“King,” said the hawk, “that bird you hold in your arms is my natural prey. Surely you know that. I am starving, and if I do not have a meal, I will die. You, good king, would not wish to be responsible for my death. I am a spirited creature, and my presence on this earth was ordained by the gods. I know you do not want to disobey the gods and see me die of starvation. Give me that dove, and I will be forever grateful to you.”

The king looked into the hawk’s dark eyes and felt compassion for the bird. Then he looked down at the dove and stroked its white feathers.

“Save me, good king,” whispered the dove. “I have come to you for help. My family will not survive without me.”

The king looked into the hawk’s eyes once more and said: “I cannot give you the dove who has come to me for protection. To save your life, I grant you any other food you wish to eat. I will give you all that is equal to this dove.”

The hawk stood tall and proud. “Very well, king,” the hawk said, “I choose your flesh. Nothing less will satisfy my deep hunger.”

“Very well,” said the king without a moment’s hesitation, and he stood and called to his servants. “Bring a scale.”

The servants, who loved their king, began to murmur among themselves, but they obeyed his wish and brought him a large silver scale. The king placed the dove on one side of the scale, then took up a sharp knife and cut a piece of flesh from his own body and placed this on the other side. The scale did not move. He cut another piece, and still the scale did not budge. He cut again, but the more flesh he placed on the scale, the heavier the dove seemed to become.

At last the king stepped onto the scale. Only when he stood tall upon one side did the scale balance.

“You will have to eat me whole,” the king said to the hawk. “It seems my weight is equal to the dove.”

Just at that moment a voice spoke from the heavens. “Well done, king. The scale is balanced.”

“Take me, then, good hawk,” said the king. His servants and advisers gasped in horror. “King, you must not give up your life for a mere white dove.”

“I will not break my promise,” said the king.

The hawk and the dove looked into each other’s eyes, and at that moment they abandoned their disguises and stood before the noble king in their true forms, as the great gods Indra and Dharma.

“You are, indeed, as good as you appear,” they said, and with these words they restored his injured body, gave him their blessings, and disappeared, promising always to watch over the compassionate king.