The Little Flower of Compassion 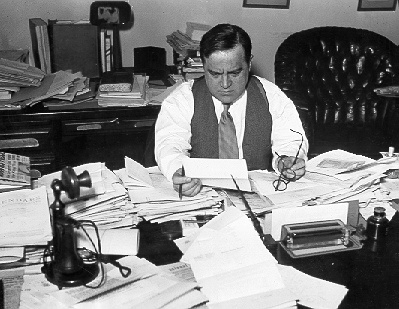 There’s been a story floating around for a long time about Fiorello La Guardia, who was the popular mayor of New York during the depression.No one is really sure if it is true or not, but the very fact that the story persists tells us something important about La Guardia — and about ourselves. Here’s the version as told by Bennet Cerf:

He presides occasionally at Police Court. One bitter cold day they brought a trembling old man before him, charged with stealing a loaf of bread. “I’ve got to punish you, declared La Guardia. “The law makes no exception. I can do nothing but sentence you to a fine of ten dollars.”

But the Little Flower was reaching into his pocket as he added, “Well, here’s the ten dollars to pay your fine. And now I remit the fine.” He tossed a ten-dollar bill into his famous sombrero. “Furthermore,” he declared, “I’m going to fine everybody in this courtroom fifty cents for living in a town where a man has to steal bread in order to eat. Mr. Bailiff, collect the fines and give them to this defendant!” The hat was passed and an incredulous old man, with a light of heaven in his eyes, left the courtroom with a stake of forty-seven dollars and fifty cents.

Snopes.com investigated this story and came across an almost identical tale, transported to Indonesia:

An Indonesian judge by the name of Marzuki was sitting in judgment of an old lady who pleaded guilty of stealing some tapioca from a plantation. In her defense, she admitted to the judge that she was indeed guilty of the crime because she was poor and her son was sick while her grandchild was hungry.

The plantation manager insisted that she be punished as a deterrent to others. The judge going through the documents then looked up and said to the old lady, “I’m sorry but I cannot make any exception to the law and you must be punished.” The old lady was fined Rp. 1 million (USD 100) and if she could not pay the fine then she will be jailed for 2 and a half years as demanded by the law.

She wept as she could not pay the fine. The judge then took off his hat and put in Rp. 1 million into the hat and said “In the name of justice, I fine all who are in the court Rp. 50 thousand (USD 5.50) as dwellers of this city for letting a child to starve until her grandmother has to steal to feed her grandchild. The registrar will now collect the fines from all present.” The court managed to collect Rp 3.5 million (USD 200) whereby once the fine was paid off, the rest was given to the old lady – including the fine collected from the plantation manager.