The Menorahs of Billings, Montana 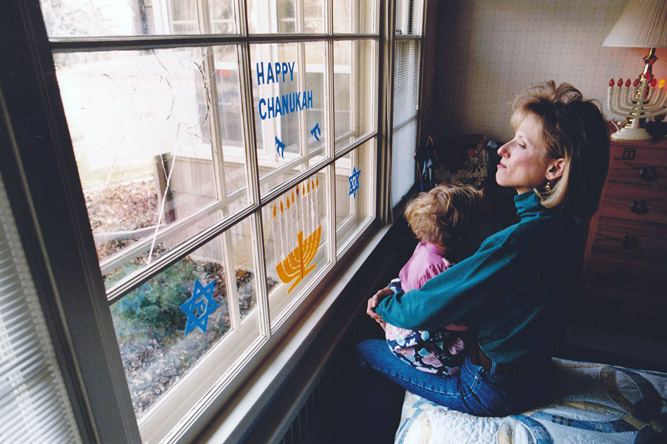 Hanukkah, the 8-day Jewish festival of lights, begins tonight at sundown. Jews all over the world light a menorah, a nine-candle candelabra, to commemorate a miracle during the time of the Macabee revolt in the 2nd Century BCE. In 1993 the 50 or so Jewish families in Billings, Montana followed this tradition, including the Schnitzer family.

But this year was different. Billings had been experiencing a spate of hate crimes. A skinhead, part of what he considered to be an “Aryan Nation,” threw a rock through the Schnitzer’s son Isaac’s window.

A police officer suggested that they not put up any Jewish symbols. Tammie Schnitzer, interviewed by the local newspaper, said, ” “Maybe it’s not wise to keep these symbols up,” she said. “But how do you explain that to a child?”

The next morning a Christian woman, reading about the incident, imagined what it would be like to tell her children that it was too dangerous to put up a Christmas tree. And she had an inspiration. She went to her pastor and suggested that the children draw menorahs the next morning in Sunday school and that they put them in THEIR windows.

Some estimate that there were eventually 6,000 homes (in a city of 80,000) that displayed Menorahs. It was dangerous. Windows were smashed. Shots were fired into a Catholic school that had joined the campaign. Hateful graffiti was spray-painted on the sides of buildings. The police chief conceded that it was dangerous — but it was MORE dangerous not to do it, he said. For every menorah that was torn down, ten went up in its place.

Sarah Anthony, a member of the Billings Human Rights Coalition, told a reporter:

I mean, what have we done so far? Come up with a plan. Make a few phone calls. Put up menorahs. That’s all we did. Pretty simple stuff, actually. But you have to build the sentiment, to forge the real feeling that goes deep. We did something right here, and we will do it again if we have to. If we don’t, there are people who would break every window in Billings, and we would look in those windows and see ourselves.

We might say that it can’t happen here, but it DID happen in San Antonio in the wake of the September 11th attacks in 2001. And San Antonio responded with the same compassion — walking with another in his or her suffering with genuine affection — as the people of Billings. When a Persian restaurant had its windows smashed, the community filled the place with an interfaith dinner. Women volunteered to accompany Muslim women in hijab to the grocery store so they would not be harassed.

It happened again August, 2015. The neighborhood around Rodfei Sholom, an Orthodox Jewish community off NW Military Highway, found itself covered in anti-Semitic graffiti. The police said that more than 30 cars, homes, buildings and other structures were spray painted with graffiti which included swastikas, “KKK,” and hateful epithets. A few days later, more graffiti was found on a storage shed near the back of Congregation Agudas Achim, off Huebner Road just a few miles from the first episode. Rabbi Aryeh Sheinberg noted the support of his neighbors: “Our congregation experienced a hate crime, but our community experienced love and support from every facet of our community”

We need to keep telling the story of the menorahs of Billings again and again, because, alas, we will need it again. And again. Until, one day, maybe we