The Merchant, the Tiger & the Six Judges 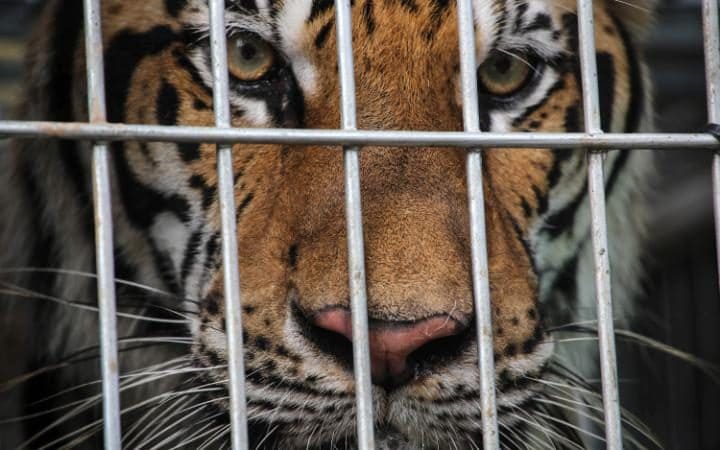 A Folk Tale From India

It has been said that compassion manifested in government is known as justice . . . .

ONCE upon a time a Merchant, who was walking along the road, came upon an iron cage in which a great Tiger had been shut up by the villagers who caught him.

As the Merchant passed by, the Tiger called out and said to him, “Brother, have pity on me, and let me out of this cage for one minute only, to drink a little water, for I am dying of thirst.” The Merchant answered, “No, I will not. Do you think I’m crazy? If I let you out of the cage you will eat me.”

“Oh, please,” answered the Tiger, “in truth I will not. I would never be so ungrateful. Just let me out, please, that I may drink some water and return.”

Then the Merchant took pity on him and opened the cage door. No sooner had he done so than the Tiger, jumping out, said, “Now, I will eat you first, and rinse down the meal with a drink of water afterwards.”

The Merchant cried, “How could you be so ungrateful? I was the one who opened the cage door!”

“You knew I was a tiger,” said the Tiger. “What do you expect? You are a fool and deserve to die.”

“Only do not kill me so quickly,” said the Merchant. “Let us first ask the opinion of six, and if all of them say it is just and fair that you should put me to death, then I am willing to die.”

“Very well,” answered the Tiger, “it shall be as you say; we will first ask the opinion of six.”

“On what must I give judgement?” asked the Banyan tree.

“This tiger,” said the Merchant, “begged me to let him out of his cage to drink a little water, and he promised not to hurt me if I did so, but now that I have let him out, he wishes to eat me. Is that fair?”

The Banyan tree answered, “Men often come to take shelter in the cool shade under my branches, from the scorching rays of the sun, but when they have rested, they cut and break my pretty branches, and scatter my leaves about the ground. Let the tiger eat the man, for men are an ungrateful race.”

At these words the tiger would have instantly killed the Merchant, but the Merchant said, “Tiger, Tiger, you must not kill me yet, for you promised that we should first hear the judgment of six.”

“Very well,” said the Tiger, and they went on their way. After a little while they met a camel.

“On what shall I give judgement?” asked the Camel.

And the Merchant related how the Tiger had begged him to open the cage door, and promised not to eat him if he did so; and how he had afterwards determined to break his word, and asked if that was fair? The Camel replied, “When I was young and strong, and could do much work, my master took care of me and gave me good food; but now that I am old, and have lost all my strength in his service, he overloads me and starves me, and beats me without mercy. Let the Tiger eat the man, for men are in unjust and cruel race.”

The Tiger would then have killed the Merchant, but the latter said, “Stop, Tiger, for we must first hear the judgement of six.”

So they both went again on their way. At a little distance they found a Bullock lying by the roadside. The Merchant said to him, “Brother Bullock, Brother Bullock, hear and give judgment.”

“On what must I give judgment?” asked the Bullock.

The Merchant answered, “I found this tiger in a cage, and he begged for me to open the door and let him out to drink a little water, and promised not to kill me if I did so, but when I had let him out he declared he would put me to death. Is it fair he should do so or not?”

The Bullock said, “When I was able to work, my master fed me well and tended me carefully, but now that I am old he has forgotten all I did for him, and left me by the roadside to die. Let the Tiger eat the man, for men have no pity.”

Three out of the six had given judgment against the Merchant, but still he did not lose all hope, and determined to ask the other three.

They next met an Eagle flying through the air, to whom the Merchant cried, “O Eagle, great Eagle, hear and give judgment.”

“On what must I give judgment?” asked the Eagle. The Merchant stated the case, but the Eagle answered, “Whenever men see me they try to shoot me; they climb the rocks to my nest and steal my eggs. Let the Tiger eat the man, for men are the persecutors of the earth.”

Then the Tiger began to roar, and said, “The judgment of all is against you, O Brahmin!” But the Merchant answered, “It’s not over yet! Stay yet a little longer, for two others must first be asked.” After this they saw an Alligator, and the Merchant related the matter to him, hoping for a more favorable verdict. But the Alligator said, “Whenever I put my nose out the water, men torment me and try to kill me. Let the Tiger eat the man, for as long as men live we shall have no rest.”

The Merchant gave himself up as lost, but again he begged the Tiger to have patience, and let him ask the opinion of the sixth judge. Now the sixth was a Jackal.

THE Merchant told his story and said to him, “Mama Jackal, Mama Jackal, do tell us what is your judgment?”

The Jackal answered, “It is impossible for me to decide who is in the right and who in the wrong, unless I know exactly where each of you was at the time. Show me the place.” So the Merchant and the Tiger returned to the place where they first met, and the Jackal went with them. When they got there, the Jackal said, “Now Merchant, show me where you stood.”

“Here,” said the Merchant, standing by the iron tiger-cage.

“Exactly there, was it?” asked the Jackal.

“Where was the Tiger, then?” asked the Jackal.

“In the cage,” answered the Tiger.

“How do you mean?” said the Jackal, “how were you within the cage; which way were you looking?”

“Why I stood so,” said the Tiger, jumping into the cage, “and my head was on this side.”

“Very good,” said the Jackal, “But I cannot decide the matter until I have all the facts. Was the cage door open, or shut?”

“Shut, and bolted,” said the Merchant.

“Then shut, and bolt it,” said the Jackal.

When the Merchant had done this, the Jackal said, “Oh, you wicked and ungrateful Tiger! When the good Merchant opened your cage door, is to eat him the only return you would make? Stay there for the rest of your days, for no one will ever let you out again. Proceed on your journey, friend Merchant. Your road lies that way, and mine this.”

So saying, the Jackal ran off in one direction, and the Merchant went rejoicing on his way in the other.