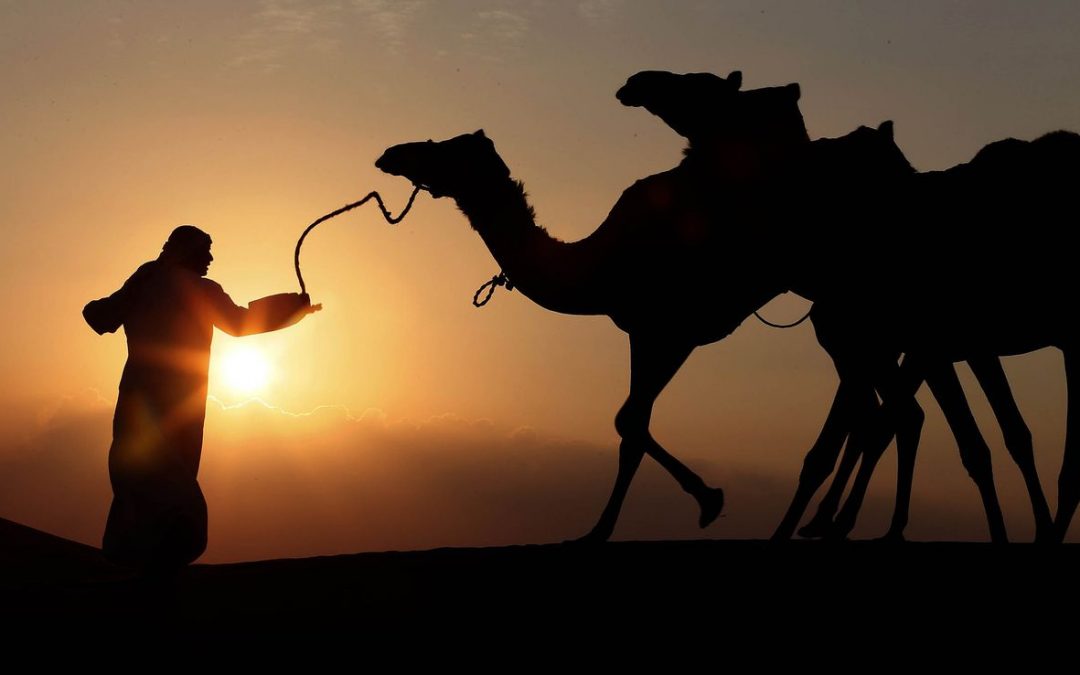 A herd of camels happened to be passing an orchard, the owner of which was seated upon the “sinsileh” or rough stone fence. One of the animals, a very fine male, caught hold of the overhanging bough of a fruit tree and broke it off with his teeth. Hereupon the owner of the orchard snatched up a stone and threw it at the camel. The aim was unexpectedly true, and the beast fell dead.

Its owner, stung to fury by the loss of his property, snatched up the same stone and threw it with as deadly accuracy at the owner of the orchard, who, struck on the temple, was instantly killed. Horror-struck at his rash act, and realizing what the consequences would be, the frightened camel-herd leapt on to the swiftest of his beasts, and leaving the rest to shift for themselves, fled as fast as he could. He was, however, promptly followed by the sons of the slain man, and forced to return with them to the scene of the tragedy, which happened to be close to the camp of the Caliph Omar ibn el Khattâb.

The sons of the dead orchard-owner demanded the life of the man who had slain their father, and, though the latter explained that he had not done the deed with malice aforethought, but under the impulse of sudden provocation, yet, as he had no witnesses to prove that he was speaking the truth, and as the sons of the dead man would not hear of a pecuniary compensation, the Caliph ordered the man-slayer to be beheaded.

Now in those times it was customary for the execution of a criminal to take place almost immediately after he had been condemned to die. The mode of procedure was as follows: a skin or hide called “nuta ’a” was spread in the monarch’s presence, and the person to be beheaded was made to kneel upon this hide with his hands bound behind him. The “jelâd” or executioner, standing behind him with a drawn sword, then cried aloud, “O Commander of the Faithful, is it indeed your decision that Fulân be caused to forsake this world?” If the Caliph answered, “yes,” then the executioner asked the same question the second time, and if it were answered in the affirmative, he asked it once again for the third and last time, and immediately afterwards, unless the potentate instantly revoked the fatal order, he struck off the prisoner’s head.

Now, on the occasion of which we are speaking, the condemned, finding that his life was irretrievably forfeited, earnestly besought the Caliph to grant him three days’ respite that he might go to his distant tent and arrange his family affairs. He swore that at the expiration of that term he would return and pay the penalty of the law. The Caliph told him that he must find a surety to die in his stead in case he should break his word.

The poor man looked around him in despair upon the crowd of utter strangers. The “nuta ’a” was brought and the executioner advanced to bind his hands. In despair he cried out, “Has the race of the manly 1 perished? “Receiving no answer, he repeated the question with yet greater emphasis, whereupon the noble Abu Dhûr, who was one of the “Sohaba” or companions of the Prophet, stepped forward and asked the Caliph’s permission to become his surety. The monarch granted his request, but warned him that his own life would be sacrificed in case the man did not return within the time stipulated.

Abu Dhûr having agreed to this, the condemned was set free. He started off at a run and was soon out of sight.

The three days had passed, and as the man-slayer had not returned and nobody believed that he would do so, the Caliph, yielding to the dead man’s relatives, gave orders that Abu Dhûr should pay the forfeit.

The hide was brought and Abu Dhûr, his hands tied behind him, knelt upon it amid the lamentations and tears of his numerous friends and relatives. Twice, in a voice that was heard above the noise of the assembly, had the executioner asked the ruler of Islâm if it was indeed his will that the noble man should quit this world. Twice had the monarch grimly answered “yes” when, just as the fatal question was to be put for the third and last time, some one cried out, “For Allah’s sake, stop! for here comes some one running!”

At a sign from the Caliph the executioner remained silent, and, to every one’s astonishment, the man who three days previously had been condemned to die ran up out of breath and, with the words, “Praise be to Allah” sank exhausted to the ground.

“Fool,” said the Caliph to him, “why didst thou return? Hadst thou stayed away, the surety would have died in thy stead and thou wouldst have been free.”

“I returned,” replied the man, “in order to prove that not only the race of the virtuous has not yet died out but also that of the truthful.”

“Then why didst thou go away at all?” asked the monarch.

“In order,” said the man, who was now kneeling with bound hands upon the hide from which Abu Dhûr had arisen, “in order to prove that the race of the trustworthy has not yet perished.”

“Explain thyself,” said the Commander of the Faithful.

“Some time ago,” said the man, “a poor widow came to me and entrusted some articles of value to my keeping. Having to leave our camp on business, I took the things into the desert and hid them under a great rock in a spot which no one but myself could find, and there they were when I was condemned to die. Had my life not been spared for a few days, I should have died with a heavy heart, as the knowledge of the hiding-place would have perished with me; the woman would have been irretrievably injured; and my children would have heard her curse my memory without being able to clear it. Now, however, that I have arranged my household affairs and have restored her property to the woman, I can die with a light heart.”

On hearing this Omar turned to Abu Dhûr and asked, “Is this man any friend or relative of thine?”

“Wallahi!” replied Abu Dhûr, “I assure thee, O Emìr el Mûminin, that I never set eyes on him till three days since.”

“Then, why wast thou such a fool as to risk thy life in his stead, for had he not returned, I was determined that thou shouldst die in his place.”

“I did so in order to prove that the race of the manly and virtuous had not yet died out,” replied Abu Dhûr.

On receiving this answer the Caliph was silent for a while; then, turning to the kneeling man, he said, “I pardon thee, thou canst go.”

“Why so? O Commander of the Faithful!” asked an aged and privileged sheykh.

“Because,” answered Omar, “as it has been proved that the races of the manly, the virtuous, the truthful, and the trustworthy have not yet perished; it only remains for me to demonstrate that the races of the clement and the generous are also still alive, and I therefore not only pardon the man, but shall pay the ‘dìyeh’ (blood money) out of my own private means.”