The Pious Man and the Shopkeeper 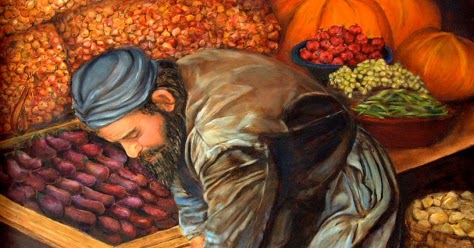 There lived a pious man all by himself, who spent most of his time in praying, fasting and praising Allah. Almost all his waking hours were utilized in meditation and devotions. He was very happy with his spiritual progress. No wicked thoughts came to his mind and no evil temptations entered his heart.

One night, he dreamt a rather disturbing dream. He saw that a shopkeeper in the town was far superior to him in spirituality and that he must go to him to learn the basics of true spiritual life.

In the morning, the pious man went in search of the shopkeeper. He found him busy with his customers, selling goods and collecting money with a cheerful face. He sat there in a corner of the shop and watched the shopkeeper carefully. No signs of any spiritual life at all, he said to himself. His dream could not be true. But then he saw the shopkeeper disappear to pray his Salah. When he returned, he was busy dealing with money matters again.

The shopkeeper noticed the pious man sitting in the corner and asked: “As Salamu Alaikum, would you like something, brother?”

“Wa Alaikum As Salam. Oh! No! No!” said the pious man. “I don’t want to buy anything, but I want to ask you a question.” He then related his dream.

“Well, that is very simple to explain,” said the shopkeeper, “but you will have to do something for me before I answer your question.”

“I will do anything for you,” replied the pious man.

“All right! Take this saucer; there is some mercury in it. Go to the other end of the street and come back fast within half an hour. If the mercury falls out of the saucer, you will hear nothing from me. There you go now.”

The pious man took the saucer and started running. The mercury nearly wobbled out of the saucer. He saved it just in time, and slowed down. Then he remembered he had to return within half an hour, so he started walking at a fast pace. At long last he returned puffing and panting. “Here is your mercury, safe and sound,” he told the shopkeeper. “Now tell me the true interpretation of my dream.”

The shopkeeper looked at the pious man’s weary condition and asked him: “Well, friend, how many times did you remember Allah while you were going from this end of the street to the other?”

“Remember Allah!” exclaimed the pious man. “I did not remember Him at all. I was so worried about the mercury in the saucer.”

“But I do remember Him all the time,” said the shopkeeper. “When I am doing my business, I am also carrying mercury in a saucer. I am fair, honest and kind to my customers. I never forget Allah Ta’ala in my dealings with other men.”