The Welsh Prince, his Dog and a Baby 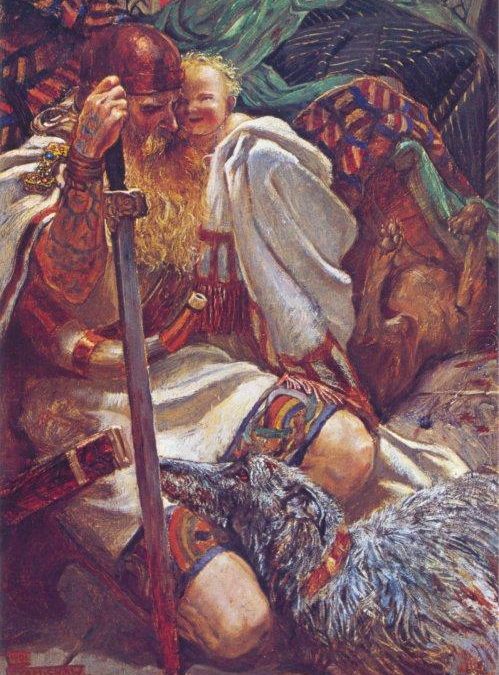 Prince Llewelyn had a favorite greyhound named Gellert that had been given to him by his father-in-law, King John. He was as gentle as a lamb at home, but a lion in the chase.

One day Llewelyn went to the chase and blew his horn in front of his castle. All his other dogs came to the call, but Gellert never answered it. So he blew a louder blast on his horn and called Gellert by name, but still the greyhound did not come.

At last Prince Llewelyn could wait no longer and went off to the hunt without Gellert. He had little sport that day because Gellert was not there, the swiftest and boldest of his hounds. He turned back in a rage to his castle, and as he came to the gate, who should he see but Gellert come bounding out to meet him.

But when the hound came near him, the Prince was startled to see that his lips and fangs were dripping with blood. Llewelyn started back and the greyhound crouched down at his feet as if surprised or afraid at the way his master greeted him.

Now Prince Llewelyn had a little son a year old with whom Gellert used to play, and a terrible thought crossed the Prince’s mind that made him rush towards the child’s nursery. And the nearer he came the more blood and disorder he found about the rooms. He rushed into it and found the child’s cradle overturned and daubed with blood. Prince Llewelyn grew more and more terrified, and sought for his little son everywhere. He could find him nowhere but only signs of some terrible conflict in which much blood had been shed.

At last he felt sure the dog had destroyed his child, and shouting to Gellert, “Monster, thou hast devoured my child”, he drew out his sword and plunged it in the greyhound’s side, who fell with a deep yell and still gazing in his master’s eyes. As Gellert raised his dying yell, a little child’s cry answered it from beneath the cradle, and there Llewelyn found his child unharmed and just awakened from sleep. But just beside him lay the body of a great gaunt wolf all torn to pieces and covered with blood.

Too late, Llewelyn learned what had happened while he was away. Gellert had stayed behind to guard the child and had fought and slain the wolf that had tried to destroy Llewelyn’s heir. In vain was all Llewelyn’s grief; he could not bring his faithful dog to life again. So he buried him outside the castle walls within sight of the great mountain of Snowdon, where every passer-by might see his grave, and raised over it a great cairn of stones. And to this day the place is called Beth Gellert, or the Grave of Gellert.

You might recall a similar story line in the Disney film, “Lady and the Tramp.” Tramp save the baby from being attacked by a rat, but his actions are misunderstood and he ends up in the pound.