The Wolf and the Sheep 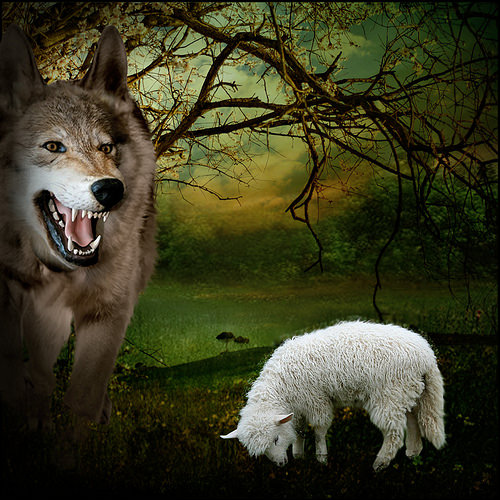 Sad though it be, one must suffer; though it pains, forgive,
So long as someone can a good explanation give.

A wolf had made a treaty with sheep to get their pelts;
And the sheep, seeing a good opportunity, felt
That they had bound him so air-tight contractually
That henceforward they need have no fear for their safety.

Some days later, he who always covets a sheep’s hide
Ate a lamb in the field at high noon, in broad daylight.
The sheep raised a cry! Wolf replied: “Why the dithyrambs?”
In the treaty there is nary a mention of lambs.”
Then he strangled a ewe: and again an uproar soared.
Quoth the wolf: “Don’t you know, she came of her own accord.”

Before long there were more complaints and more commotion
As wolf killed a sheep, then some in collaboration.
“Others ripped them up,” said wolf, “I merely assisted.”
And so, as the burgeoning commotion persisted,
Whether he’d make frontal assault or stealthily creep,
He would always explain himself—and consume the sheep.

This is taken from Fables and Poems (1779) by Ignacy Krasicki.