There Goes the Sun — Bill Sinkin, a Compassionate Businessman 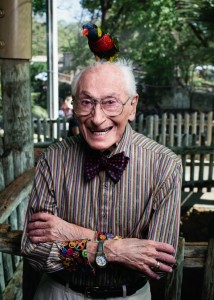 A compassionate business? What would one look like? We have a great example, here in San Antonio.

He treated others as he wished to be treated himself and avoided treating people in ways he did not like to be treated. He remembered being bullied — beaten — as a child because he was Jewish and wore funny clothes. His parents, Russian immigrants, dressed him in a frou-frou velvet suit for his first day at Collins Garden Elementary and the other 6-years-olds didn’t like it.

He carried that lesson with him when he bought a bank. Two banks, actually — on the East and South Sides. He gave loans to Black businesses. Hired Black tellers. His was the first bank in Texas to have African-Americans on its board of directors. Some customers threatened to withdraw their money. He received death threats. That was fine with him. He lent money to women and Mexican-Americans when no one else would. Texas State Bank was known as the bank with a heart. Retired businessman and friend Charles Williams told Texas Public Radio that “The thing that impressed me about him was that he put his money where his mouth was.”

He didn’t stop there. In the 60s he and his friend the late G.J. Sutton took a table at a popular Riverwalk restaurant. They weren’t served. The Jewish and Black businessmen came back the next day. And the next. And the next . . . until, finally, they were. San Antonio was the first southern city to integrate without violence. Bill, and others who were doing the same thing — Rabbi Jacobson, The Rev. Claude Black and Archbishop Florey — helped make that happen. He was also in on the cutting edge of interfaith dialog as one of the founders (with Ramiro Cavazos) of the Jewish-Latino Dialogue. He told the 300 guests at his 100th birthday celebration in May that he is most proud of his “efforts fighting racists.” He got a standing ovation.

He reflected to Iris Dimmick, editor of the Rivard Report, that “San Antonio is one of the few soft cities. That means that it has grown without (extreme) violence … we’ve never had a (major) riot … the way this happened is through education – that’s how a city grows properly … it’s a splendid example of the fusion of different cultures of the world with dignity and acceptance.”

Bill was one of the guys behind HemisFair, the 1968 World’s Fair in San Antonio. The theme was “The Confluence of Civilizations in the Americas.” which has Bill Sinkin written all over it — it was about the beautiful diversity of people in this city. The booming San Antonio convention and tourist industry? The bustling yet romantic Riverwalk? That’s Bill’s legacy from HemisFair.

He was one of the founders of Goodwill in San Antonio, and it’s first board president, from 1944-1947. He founded the Urban Coalition, a non-profit research and advocacy group that worked with low-income groups. He was on the planning committee — and later the board — of what is now University Hospital, our county hospital. There’s a long list of organizations he and his wife, Fay (who died in 2009) were actively engaged in.

City Public Service called him “Mr. Sunshine.” A mayor dubbed him “The Sun King.” In 1999 — when Bill was 86 — he founded Solar San Antonio. He first encountered solar energy when he was on the board of the Housing Authority and in the 1980s his bank was the first business here to install solar roof panels. San Antonio is considered a model city for community and rooftop solar use. He consulted with The Pearl; its Full Goods Building boasts a $1.35 million solar energy project, Texas’ largest, with the capacity to generate 200 kilowatts of electricity. Thank Bill.

So what can we learn from Bill? A compassionate business just doesn’t write an annual check or two to charity. It operates every day with compassion and justice. It builds relationships in the community — personal and meaningful relationships. And it can do all of that and make money. Bill will be missed -— who will take his place?

The photo is by Josh Huskin; Courtesy Solar San Antonio. And yes, that’s a bird sitting on his head. And a smiley face wristband. What’s not to like?

Later today: Bill’s obituary in the Express-News this morning was the most beautiful I have ever read. A Poem. You can read it all here, but some excerpts:

Bill’s passing released a tsunami of his love
That swept through San Antonio
Breaking open hearts
Knocking down fences
Drowning out conflicts
Cleansing and healing an entire community.
San Antonio remembered itself
To be an expression of the Divine Feminine
Infused with strength and gentleness
Capable of transforming herself
Through a more perfect communion
With the creative force at its core.
As the waves receded,
New shoots broke through the ground
Holding the promise of a better world
No longer in denial about what needed fixing
And confident that anything can be fixed.
That humble pride
Emerged to guide those who understood
That Bill’s real legacy was to model
A true citizen
Prepared to do whatever he could
To improve the lives of those he touched.