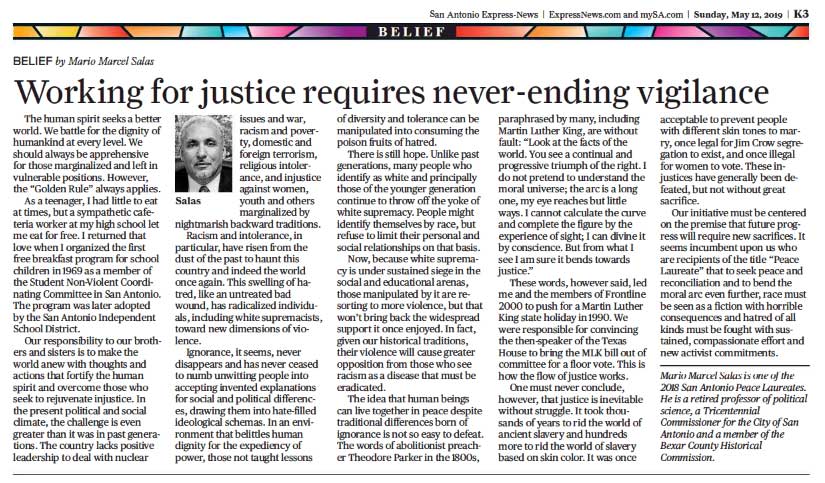 The human spirit seeks a better world. We battle for the dignity of humankind at every level. We should always be apprehensive for those marginalized and left in vulnerable positions. However, the “Golden Rule” always applies.

As a teenager, I had little to eat at times, but a sympathetic cafeteria worker at my high school let me eat for free. I returned that love when I organized the first free breakfast program for school children in 1969 as a member of the Student Non-Violent Coordinating Committee in San Antonio. The program was later adopted by the San Antonio Independent School District.

Our responsibility to our brothers and sisters is to make the world anew with thoughts and actions that fortify the human spirit and overcome those who seek to rejuvenate injustice. In the present political and social climate, the challenge is even greater than it was in past generations. The country lacks positive leadership to deal with nuclear issues and war, racism and poverty, domestic and foreign terrorism, religious intolerance, and injustice against women, youth and others marginalized by nightmarish backward traditions.

Racism and intolerance, in particular, have risen from the dust of the past to haunt this country and indeed the world once again. This swelling of hatred, like an untreated bad wound, has radicalized individuals, including white supremacists, toward new dimensions of violence.

Ignorance, it seems, never disappears and has never ceased to numb unwitting people into accepting invented explanations for social and political differences, drawing them into hate-filled ideological schemas. In an environment that belittles human dignity for the expediency of power, those not taught lessons of diversity and tolerance can be manipulated into consuming the poison fruits of hatred.

There is still hope. Unlike past generations, many people who identify as white and principally those of the younger generation continue to throw off the yoke of white supremacy. People might identify themselves by race, but refuse to limit their personal and social relationships on that basis.

Now, because white supremacy is under sustained siege in the social and educational arenas, those manipulated by it are resorting to more violence, but that won’t bring back the widespread support it once enjoyed. In fact, given our historical traditions, their violence will cause greater opposition from those who see racism as a disease that must be eradicated.

The idea that human beings can live together in peace despite traditional differences born of ignorance is not so easy to defeat. The words of abolitionist preacher Theodore Parker in the 1800s, paraphrased by many, including Martin Luther King, are without fault: “Look at the facts of the world. You see a continual and progressive triumph of the right. I do not pretend to understand the moral universe; the arc is a long one, my eye reaches but little ways. I cannot calculate the curve and complete the figure by the experience of sight; I can divine it by conscience. But from what I see I am sure it bends towards justice.”

These words, however said, led me and the members of Frontline 2000 to push for a Martin Luther King state holiday in 1990. We were responsible for convincing the then-speaker of the Texas House to bring the MLK bill out of committee for a floor vote. This is how the flow of justice works.

One must never conclude, however, that justice is inevitable without struggle. It took thousands of years to rid the world of ancient slavery and hundreds more to rid the world of slavery based on skin color. It was once acceptable to prevent people with different skin tones to marry, once legal for Jim Crow segregation to exist, and once illegal for women to vote. These injustices have generally been defeated, but not without great sacrifice.

Our initiative must be centered on the premise that future progress will require new sacrifices. It seems incumbent upon us who are recipients of the title “Peace Laureate” that to seek peace and reconciliation and to bend the moral arc even further, race must be seen as a fiction with horrible consequences and hatred of all kinds must be fought with sustained, compassionate effort and new activist commitments.

Mario Marcel Salas is one of the 2018 San Antonio Peace Laureates. He is a retired professor of political science, a Tricentennial Commissioner for the City of San Antonio and a member of the Bexar County Historical Commission.