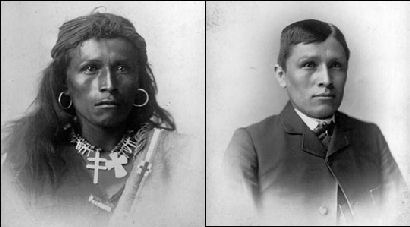 The photos are of Tom Torlino, a Carlisle School student, before and after attending the school. Courtesy Denver Public Library.

NPR’s Code Switch blog had a fascinating article about race today: The Ugly, Fascinating History Of The Word ‘Racism’.

It’s the story of a guy named Richard Henry Pratt — a well-meaning philanthropist — who was concerned that the Native American population, herded into reservations, would die off from disease and starvation if something did not change. In 1879 he convinced Congress that the problem was segregation and the solution was assimilation through education. Fifteen “Indian Schools” were established; the first was in Carlisle, Pennsylvania, at the abandoned military post that now houses the Army War College. Children, mostly teenagers, were forcible removed from their families, transported across the country and taught how to “act white.” When they were permitted to return home they could no longer communicate with their elders. They were beaten at school for speaking English. Families were denied rations — starved — if they refused to enroll their kids. Entire cultures were irreparably harmed.

The sentence that struck me: “Some of the worst outcomes that have happened in society have started out with someone thinking they were doing something good.”

Yes, compassion is needed. But Wisdom is also needed. The Golden Rule advises that we treat others as we wish to be treated ourselves. Some people have suggested a Platinum Rule — treat others the way THEY want to be treated. Are there areas in contemporary society where our compassion is so informed by our own culture that we are unable to see that others might need something else?