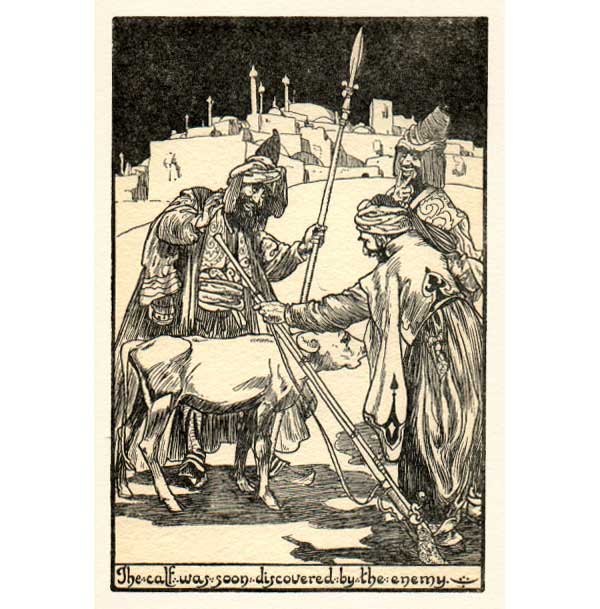 This story was collected by Lilian Gask and retold in her 1910 book “Folk Tales From Many Lands.”
The plot is very similar to that of “Stone Soup.”

THE TOWN of Tlemcen, in Algeria, was under siege, and its ill-starred inhabitants were now on the point of starvation. Daily provisions became more scarce; meat and bread fetched unheard-of prices, and in the poorer quarters many of the weaker folk had already perished from hunger. The hospitals were crowded with sick; wherever one turned there were scenes of misery and destitution, and even the bravest men seemed to have lost all hope. It was Tlemcen’s darkest hour.

In desperation the Mayor summoned a meeting of the citizens.

“My friends,” he said, “there is nothing for it but to surrender the town…. We have come to the end of our resources, and starvation stares us in the face.”

The men met this announcement in heartbroken silence, and the sound of bitter weeping came from the spot where wives and mothers clung together in their despair. After a moment’s pause a very old woman detached herself from her companions. Her name was Aïcha, and from her wrinkled face looked out a pair of bright keen eyes that were far-seeing as an eagle’s. As she came forward they flashed with scorn, and her shrunken figure straightened itself and grew tall again.

“No, no,” she cried, “we will not give in yet. I have a plan by which we can save the town. Our prophet Mahomet will help us, if you will but do as I say; the enemy will retreat, and we shall be spared the shame of a surrender.”

So impressed was the Mayor with the earnestness of her speech, that a glimmer of hope came back to his gloomy mind: he motioned the old woman to come nearer.

“Tell me your plan, good Aïcha,” he commanded. “Speak loudly, that all may hear.”

Raising her voice until it was borne to the farthest extremity of the market-place, Aïcha said briefly:

“First you must find me a calf!”

“A calf?” cried the Mayor in amazement. “Why, the last was killed long ago. It would be impossible to obtain one now for its weight in gold.”

But Aïcha persisted that a calf should be found, and her friends and neighbours scattered far and wide to search for one. They were presently rewarded by the discovery of a beautiful milk-white little animal that had been hidden away in the cow-shed of an old miser, who had thought to fetch a great price for it later on. In spite of his protestations it was carried off in triumph, and when Aïcha saw it her thin lips smiled.

“Now bring me some grain,” she cried; and at this there was a dismayed outcry.

“There is none to be had, woman, as you should know,” said the Mayor indignantly, afraid that the hope with which she had inspired him was but a will-o’-the-wisp.

“Search from house to house,” she urged the people, and, though they shook their heads, they did her bidding, with the result that after some hours’ work they brought her enough corn to fill a measure. Aïcha moistened it to increase its bulk, and at once began to feed the hungry calf. The Mayor was horrified.

“What terrible waste!” he exclaimed. “Don’t you know that even the children are starving, and that the sick in the hospitals are without food? How dare you squander thus that precious grain?”

Aïcha went on feeding the calf as if she had not heard, until the threatening mien of the Mayor compelled her to speak.

“Give me my way,” she pleaded eagerly, “and the enemy will retreat.” So he shrugged his shoulders and let her be.

When the calf had emptied the measure, Aïcha led it to the gates of the city, and, followed by a wondering crowd, she commanded the sentry to open the gates for her. This he very properly refused to do until the Mayor had come in person to enforce the order. When the gates were at last unlocked, Aïcha pushed out the calf, which at once began to browse on the short grass outside the ramparts. The enemy scarcely allowed it to enjoy a mouthful, however, for it was at once seized by a posse of soldiers, who carried it into their camp with much rejoicing. The King and his generals stared as though they could hardly believe the evidence of their eyes.

The calf was soon discovered by the enemy.

“I THOUGHT that the town was starving,” exclaimed his Majesty, looking much perturbed, “but if this were the case the citizens would most certainly have killed this beautiful calf.”

“It is rather lean,” remarked one of the nobles. “Still, your Majesty is right. They must be better provisioned than we ourselves, or they would have killed and eaten it long before now.”

The troops were naturally greatly discouraged by this new aspect of affairs, and, in order to please them, the King decreed that as it was some time since they had eaten fresh meat, they should have the calf for their own use, and make a feast with it. They killed it joyfully, for they too were on short commons, and when they found inside it a quantity of undigested corn, they were more surprised than ever at the resources of Tlemcen. The King grew very grave when this was reported to him, and at once summoned his Generals.

“If the townspeople have grain to spare for their cattle,” he pointed out, “it is we, and not they, who will perish with hunger, if the siege be not soon raised.”

The Generals sadly agreed; already discontent was brooding amidst the soldiers, and their officers knew there was danger of mutiny.

“There is nothing for it but to retreat,” they sighed, and the news ran like wildfire through the camp.

That night, as Aïcha had prophesied, the enemy disappeared, and when morning came the plains were empty. Thanks to her stratagem, the town was saved. The grateful citizens carried her on their shoulders through all the principal streets, amidst loud acclamations from the populace, and the Mayor himself took steps to ensure that the rest of her life should be spent in comfort.