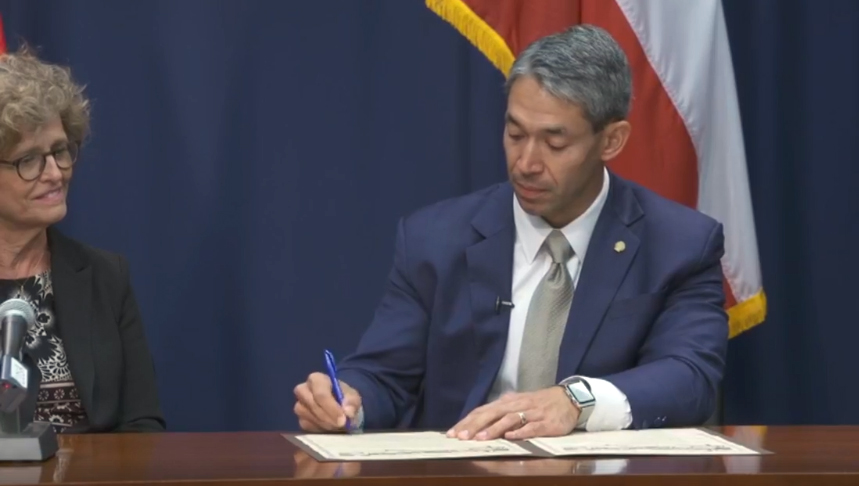 City news release: SAN ANTONIO (June 22, 2017) – Today, City Council approved a resolution affirming the Charter for Compassion and authorized registration with the International Campaign for Compassionate Cities, actions that underscore Council and Mayor commitment to modeling good government that works for everyone. The International Campaign for Compassionate Cities is a global movement inspired by the Golden Rule, or Ethic of Reciprocity, which calls on each person to treat others as he or she wishes to be treated. “For this to be one of our first acts as a City Council represents a symbolic commitment to governing with fairness and compassion,” Mayor Ron Nirenberg said. “San Antonio is a city whose residents have shown time again that they will choose acceptance over fear and unity over division.” Mayor Nirenberg celebrated this important event by signing the resolution during a Facebook Live event Thursday afternoon, the first resolution ever signed by a San Antonio mayor on social media. He was joined by Rev. Ann Helmke, the City’s Faith-Based Liaison, and members of the faith community:· Rabbi Chaim Block, Executive Director of Chabad Center for Jewish Life & Learning· Dr. Rajam Ramamurthy, Retired Neonatologist and Professor at UT Health Science Center at San Antonio and 2017 San Antonio Peace LaureateTo view Mayor Nirenberg’s full Facebook Live post, please visit https://www.facebook.com/CitySanAntonioTX/videos/10155535215597728/ “The faith community in San Antonio is one of our largest natural resources,” Rev. Helmke said. “Garnering that resource through the lens of compassion will strengthen San Antonio into fully becoming a community that truly cares by serving together collaboratively.”In 2013, the interfaith community, in partnership with the International Campaign for Compassionate Cities, established Compassionate San Antonio to bring the Charter for Compassion to the City of San Antonio. Adoption of this resolution is consistent with the goals of the City of San Antonio, Department of Human Services (DHS), and will be facilitated by and integrated with the DHS Faith-Based Initiative. “It is said that a child learns by what they live and how important it is to create an environment of compassion for them so that as they grow to adulthood they naturally gravitate towards it,” Dr. Ramamurthy said, highlighting a section of the resolution that encourages institutions of learning to teach compassion. “I think that’s very wonderful.” The Charter for Compassion is active in communities, both large and small, in approximately 50 countries around the world. It has been affirmed by more than 80 cities globally, including Austin, Dallas, Fort Worth, Houston, and San Antonio’s sister city, Monterrey, Mexico. “I think it’s so significant that you chose compassion to launch your new administration,” Rabbi Block said to Mayor Nirenberg. “It further underscores the biblical notion that we are all created in the image of God and every one of us has within us a spirit and when we focus on the spiritual, it makes it easier to look past our differences and unite together with understanding, empathy and compassion.”