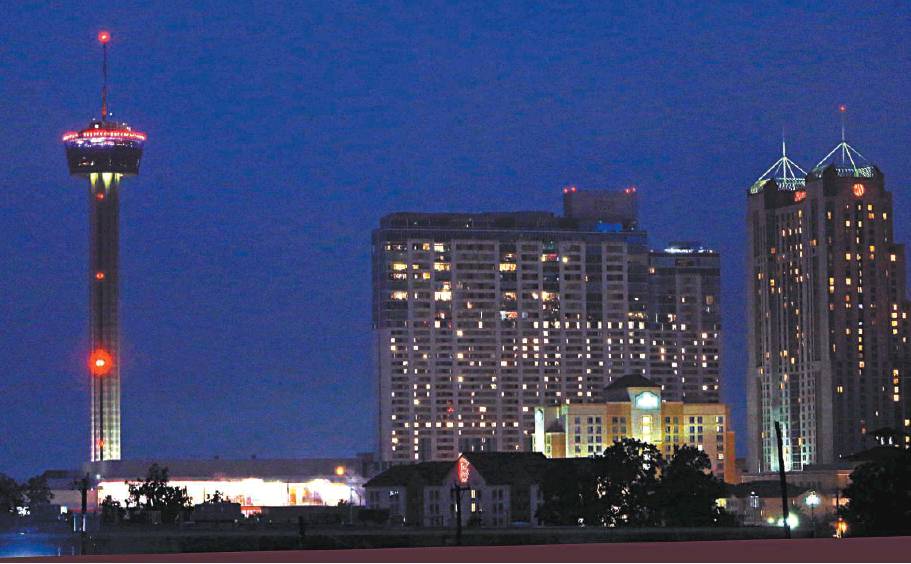 The Tower of the Americas took on a purplish glow Monday in honor of Domestic Violence Awareness Month. Every Wednesday we bring you a news roundup of compassionate San Antonio. If you want to get the news right away, follow us on Twitter @compassionNET1. And don’t forget to use the hashtag #compassionateSA so that we can find YOUR compassionate acts!

Found in the Express-News, 10 October, 2018
Walking to school is a group thing in this S.A. neighborhood
It gives kids a chance to socialize and get some physical activity before they start school. 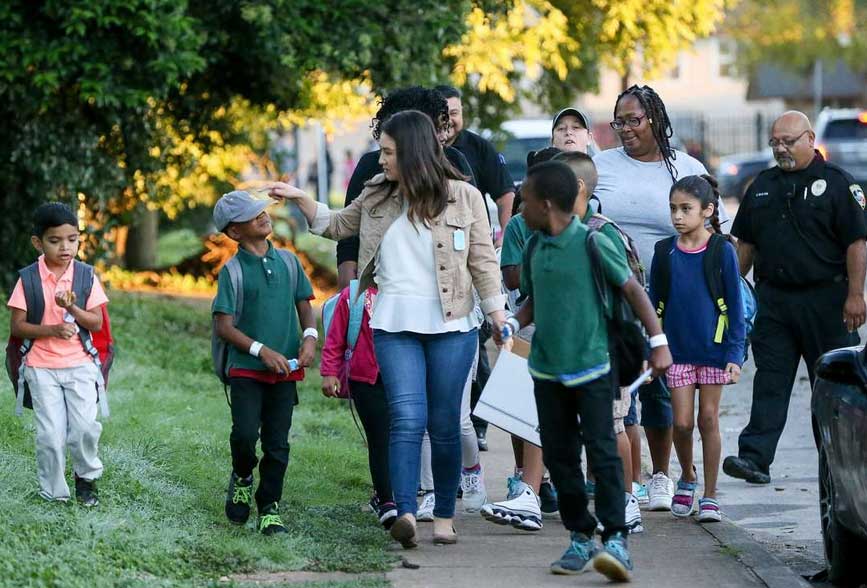 Seen on KENS 5, October 10, 2018
How Jordan Middle School is killing bullying with kindness
They’re celebrating National Bullying Prevention Month with a Heroes Week that encourages random acts of kindness toward other students and faculty. 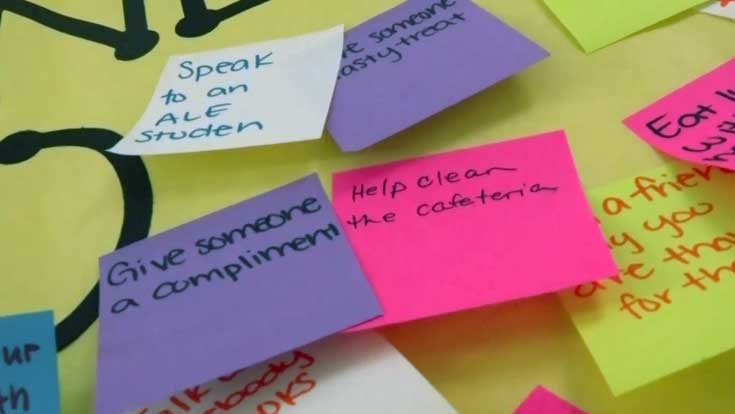 Seen on KSAT 12, 10 October, 2018
Campaign hoping to end bullying at San Antonio schools, helping students take anti-bullying oaths
“We want our kiddos to know that their words are very powerful. Their actions are very powerful as well.” 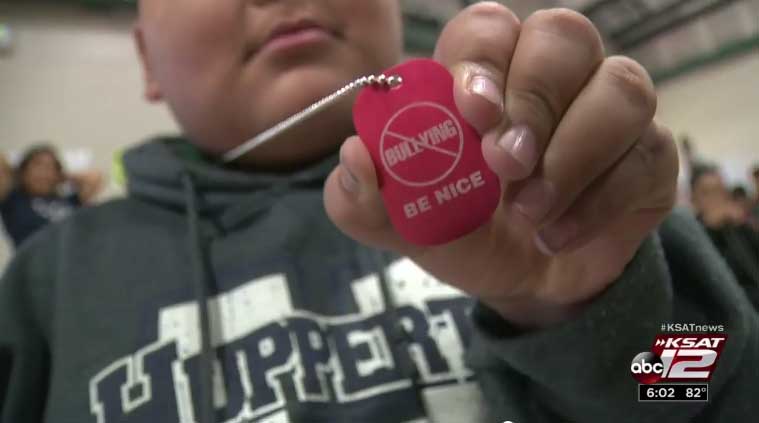 Found in the Express-News, 11 October, 2018
West Side center embraces the goal of the International Day of the Girl
The Girl Scout’s free after-school program at the center offers holistic services to the girls and adult development opportunities to their families. 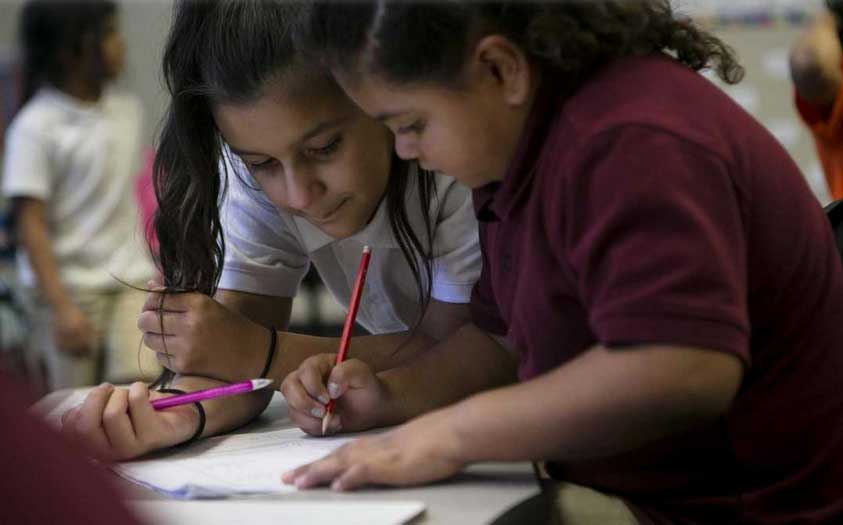 Seen on WOAI 4, 11 october, 2018
Finding a job can be tough for former inmates, few find success
The third annual Second Chance Job Fair is set for Wednesday, October 17, from 9 a.m. until 2 p.m. at the Freeman Coliseum. 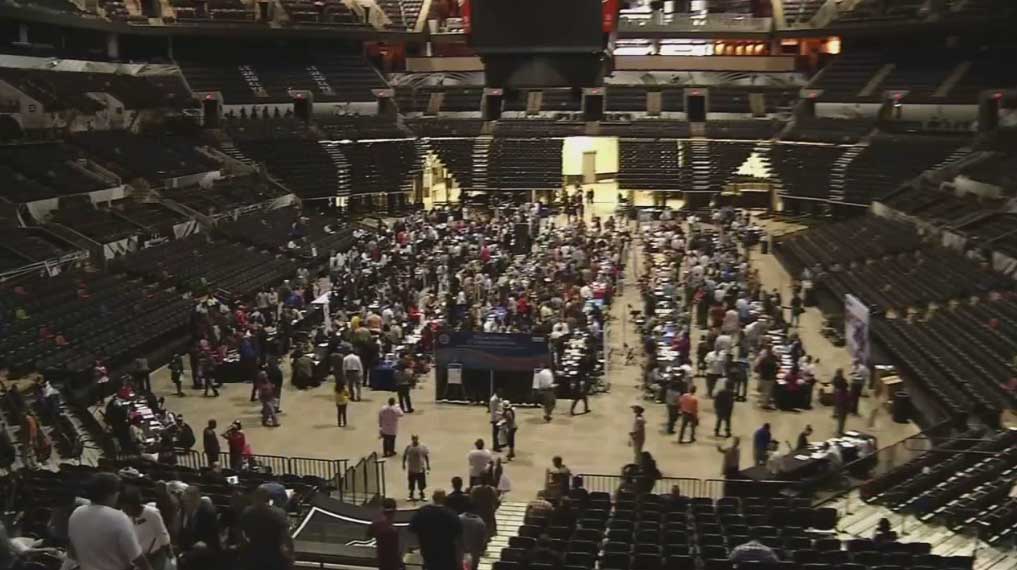 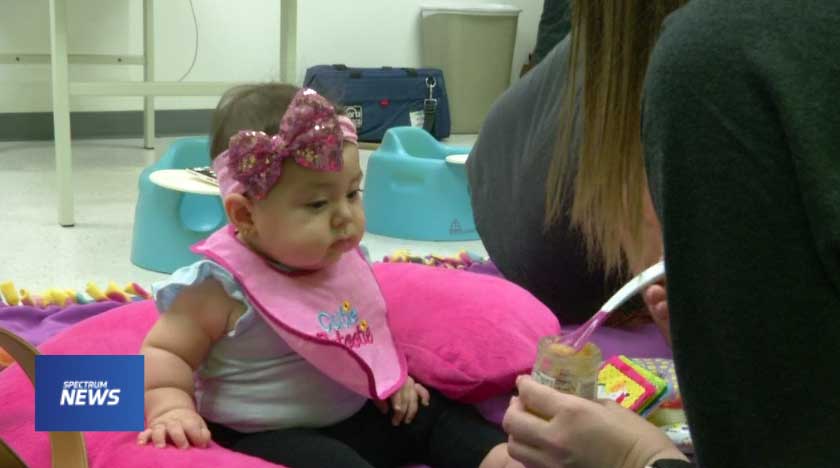 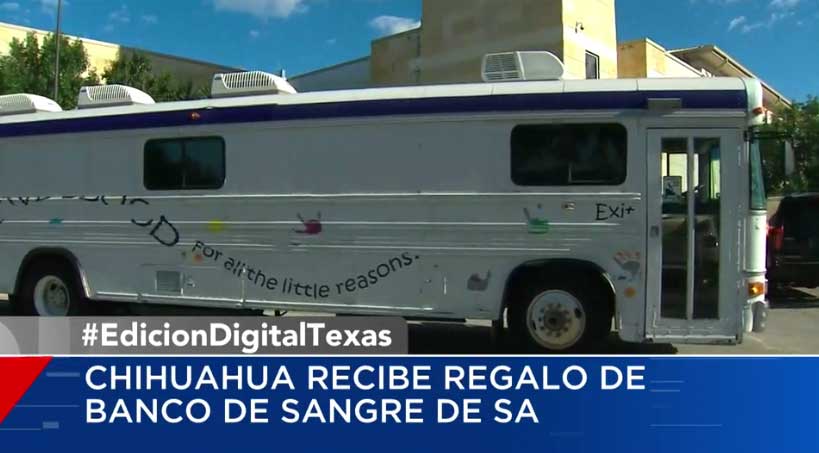 Seen on KSAT 12, 11 October, 2018
Edgewood students with special needs get work skills, training at Burleson Center
These are students in special education who have graduated and continue to receive services at Edgewood to work on employment, independent living and education or training skills. 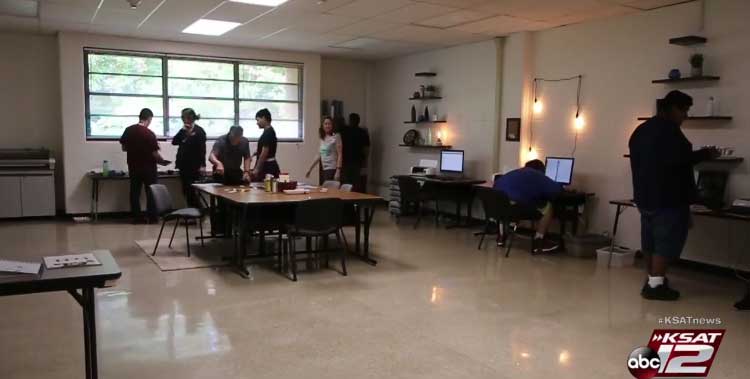 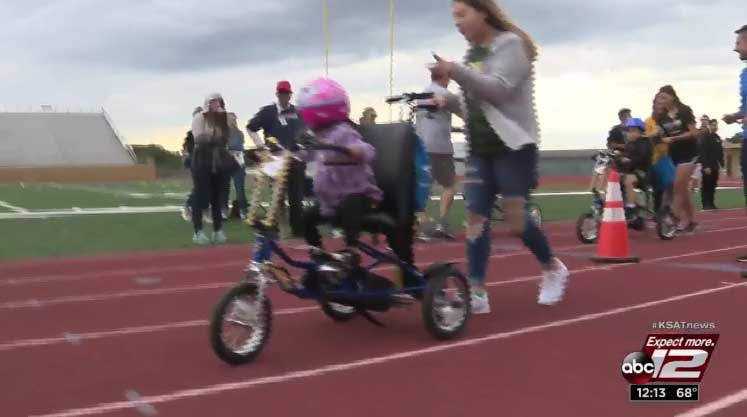 Found in the Rivard Report, 11 October, 2018
SA Archdiocese Forms Commission to Review Sexual Abuse Claims
“I cannot adequately express my sorrow to these survivors of clergy sexual abuse,” he said. “There are no words that can undo the wrong that was perpetrated upon them. But I believe that by releasing these names that it will contribute to healing.”

Also seen in the Express-News, 10 October, 2018
San Antonio archbishop vows to name ‘credibly accused’ priests
“But I believe that it is the best path to healing for survivors and the only path to transformation for our church.” 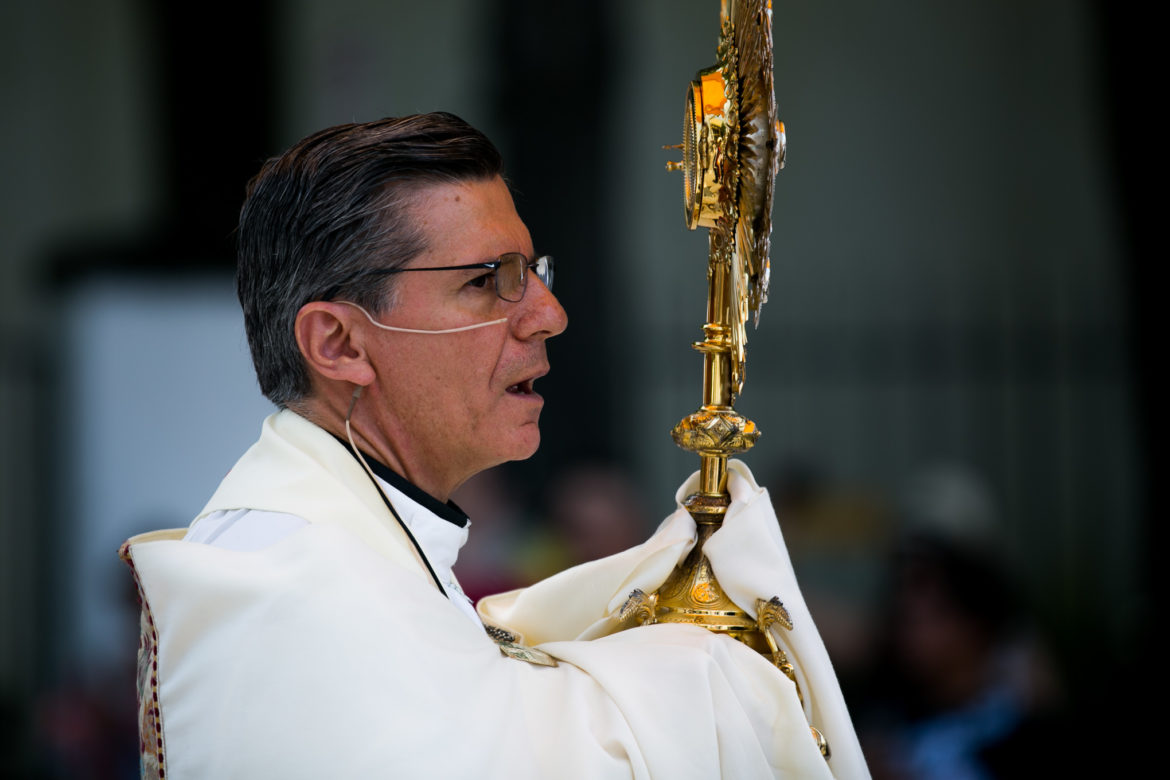 Seen on KSAT 12, 12 October, 2018
People’s Nite Market brings fresh produce to food desert on West Side
“A part of our mission is to create access to fresh produce in communities that are food and nutritional deserts.” 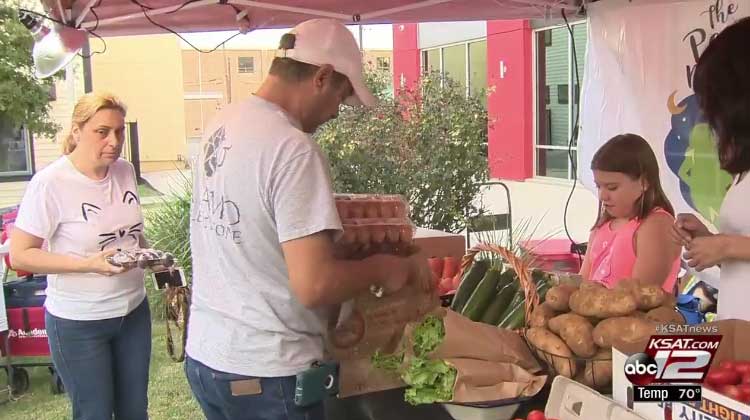 Found on the St. Mary’s University web site, 9 October, 2018
Scholarship recipients to help at-risk children and small businesses
The four @StMarysU marketing & communications students will work with the @MaestroCenterSA and the @BCFJC Family Justice Center. The $10,000 scholarships were funded by @USAA Foundation. 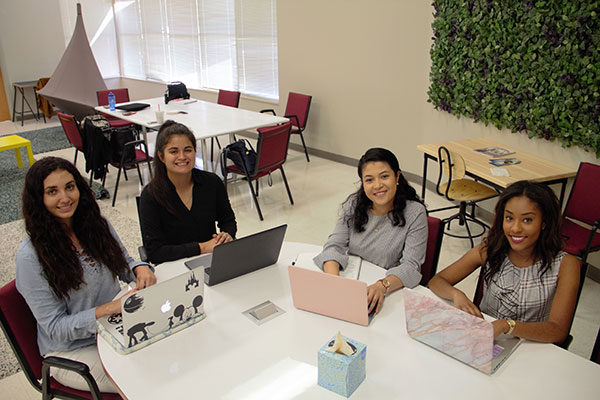 Found on KENS 5, 13 October, 2018
‘Day of Play’ encourages San Antonio kids to get active every day 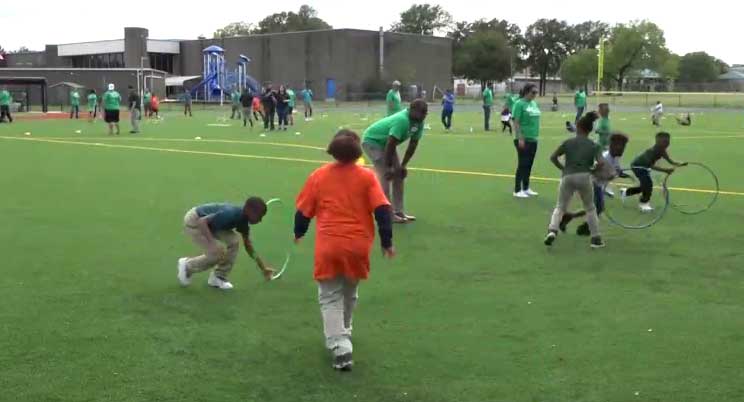 Seen on KSAT 12, 12 October, 2018
East Side hotel owner opens doors to man who lost mother, home in NW Side apartment complex fire
“He lost everything, including his mother, and I wanted to reach out and help.” 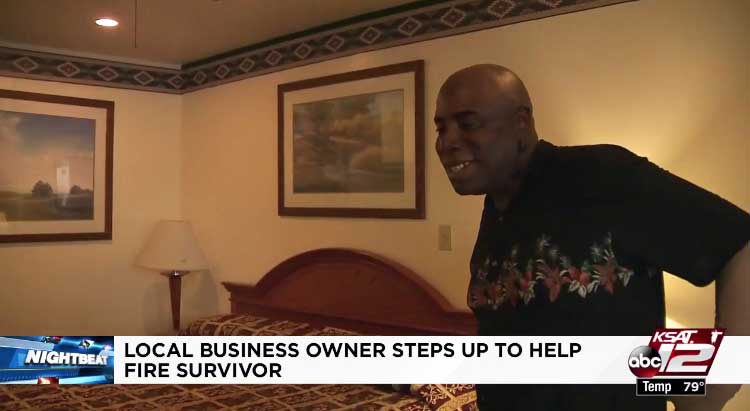 Seen on Spectrum News, 11 October, 2018
City of San Antonio Website Launches Spanish Page
“We’ve stepped up our efforts in the past couple of years to address language barriers and increase civic participation among all residents.” 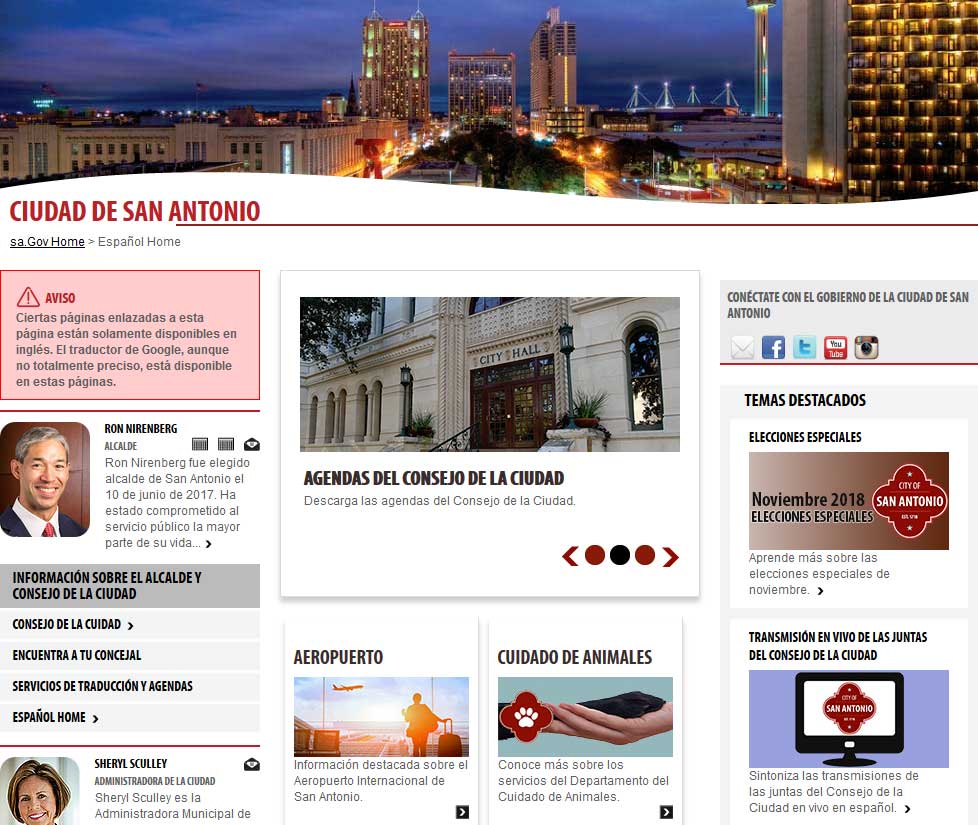 Found in the Rivard Report, 12 October, 2018
Group Launches Campaign to Engage, Connect Local Native Americans
Eventually, Urban Indian SA wants to build a cultural center for Native Americans in the area to provide a place for the community to gather and seek help. 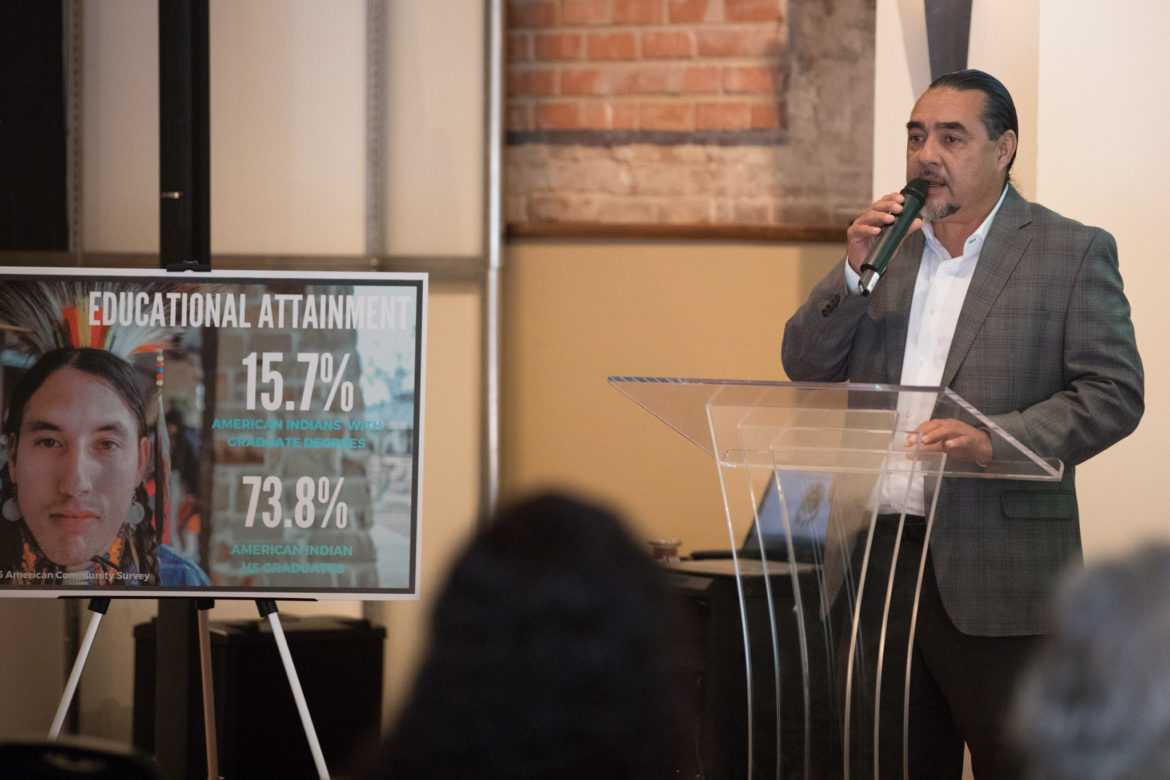 Found in the Rivard Report, October 12, 2018
Ambulance Blood Transfusions Help Save Lives, Buy Time For Trauma Victims
First responders anticipate the initiative will save 250 lives in the region in one year. 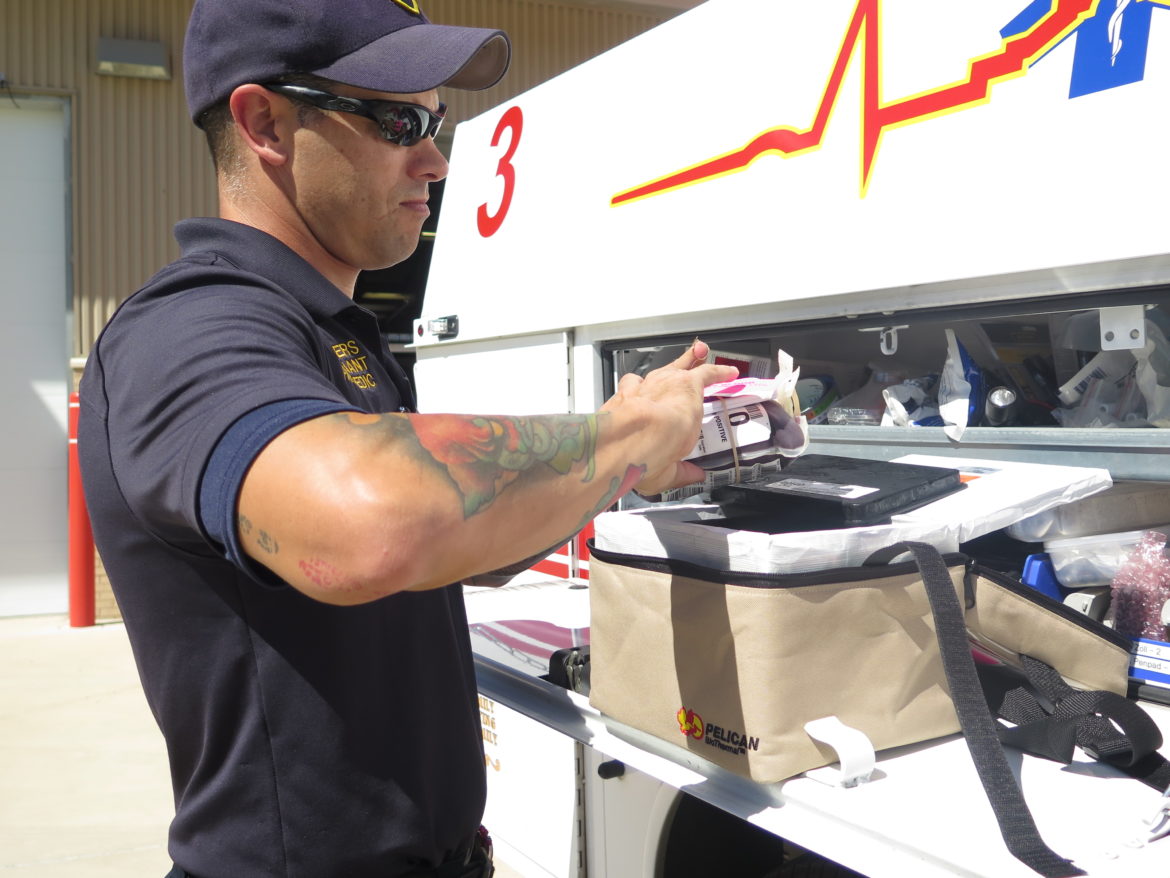 Seen on KENS 5, 14 October, 2018
National Federation of the Blind San Antonio hosting event
Monday is @whitecaneday, which educates the world about blindness and how the blind and visually impaired can live and work independently while giving back to their communities. 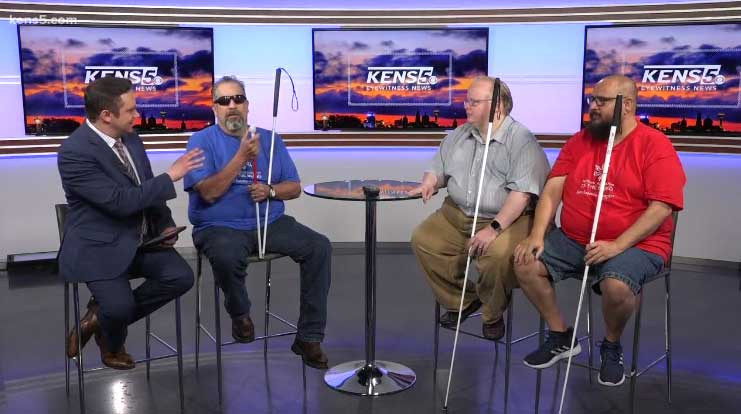 Seen on KSAT 12, 13 October, 2018
SA300: Volunteers complete sustainability-themed projects across SA
Over the past year, thousands of volunteers have contributed 18,000 hours of community service with an estimated economic impact of $443,000 to local initiatives and nonprofits. 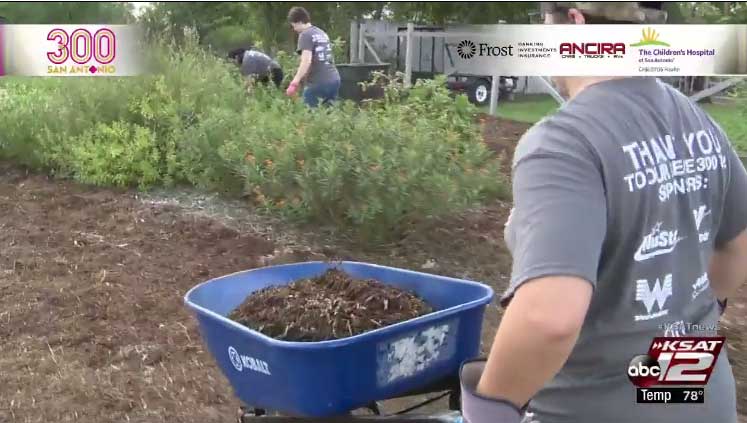 Seen on KSAT 12, 14 October, 2018
Self defense academy shows kids how to battle bullies without getting physical
“Membership in a peer group definitely decreases the opportunity for bullies to act and react to specific students. They need to seek out a support system of their peers.” 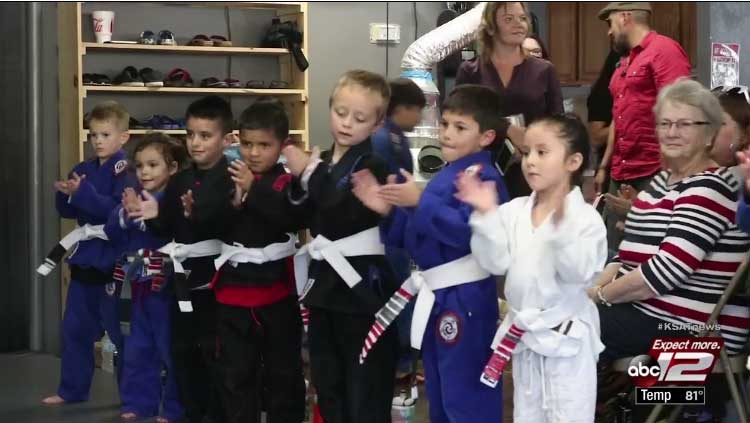 Seen on FOX 29, 15 October, 2018
Haven for Hope doing even more to help during the cold weather
Their goal is to get as many people as they inside, and to make sure that they’re safe and warm. 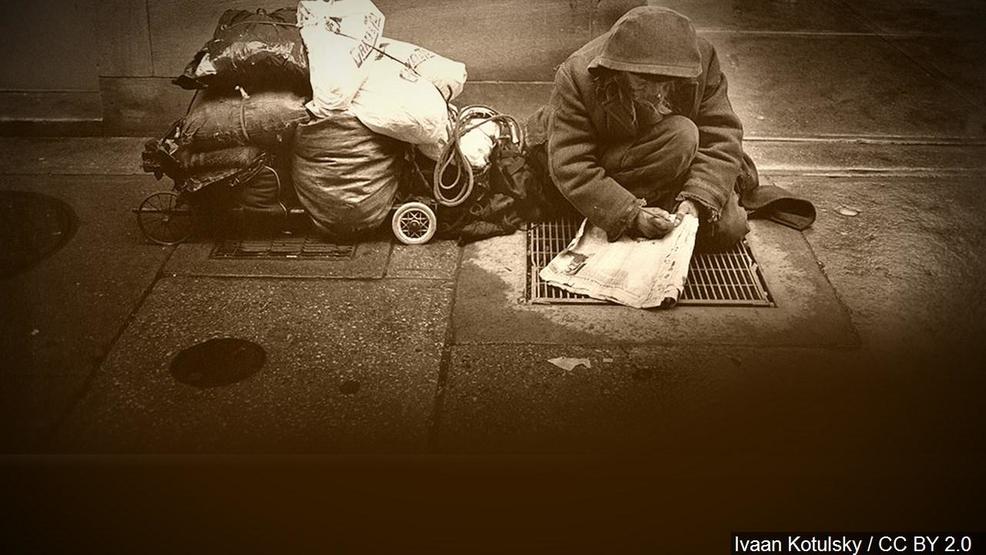 Found in the Express-News, 14 October, 2018
Free speech, civil discourse and preparing future leaders
UTSA is developing a slate of scholarly and leadership programming to include trainings, workshops, guest speakers and curriculum integrations about civil discourse. 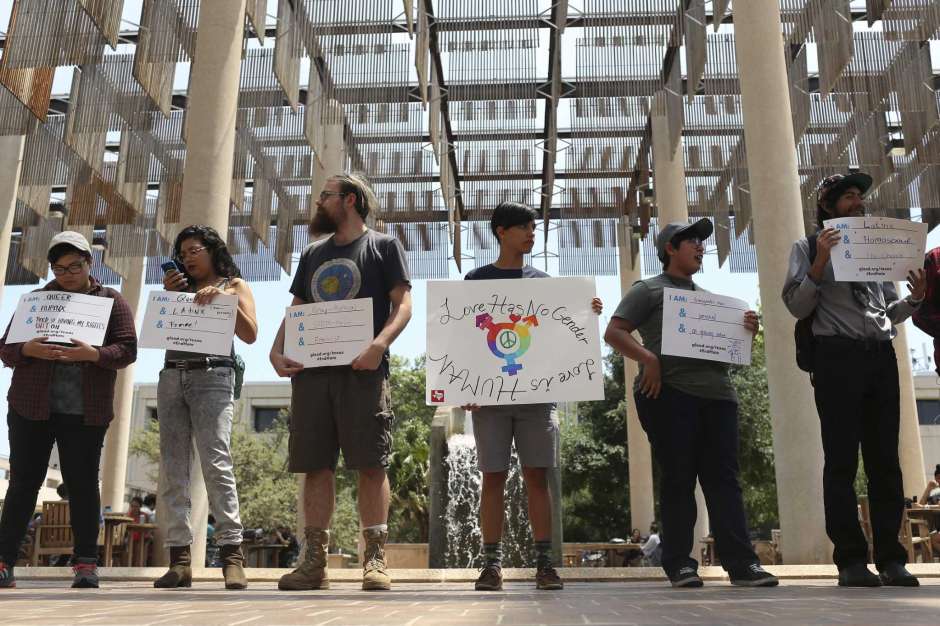 Found on KSAT 12, 16 October, 2018
Pediatric patients celebrate Halloween early
“We want to make sure they still have these memories as a family despite being in the hospital.” 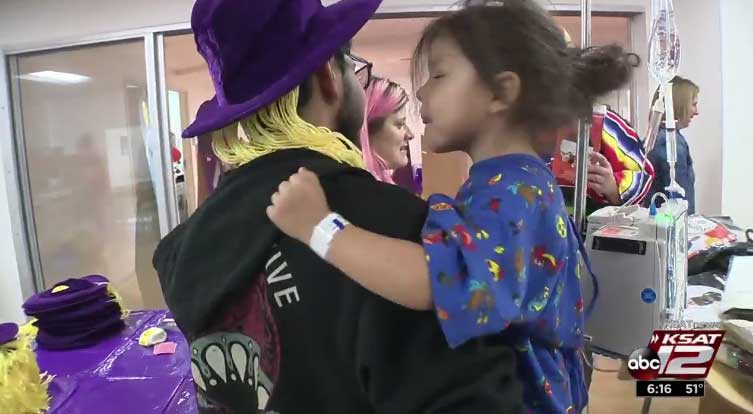