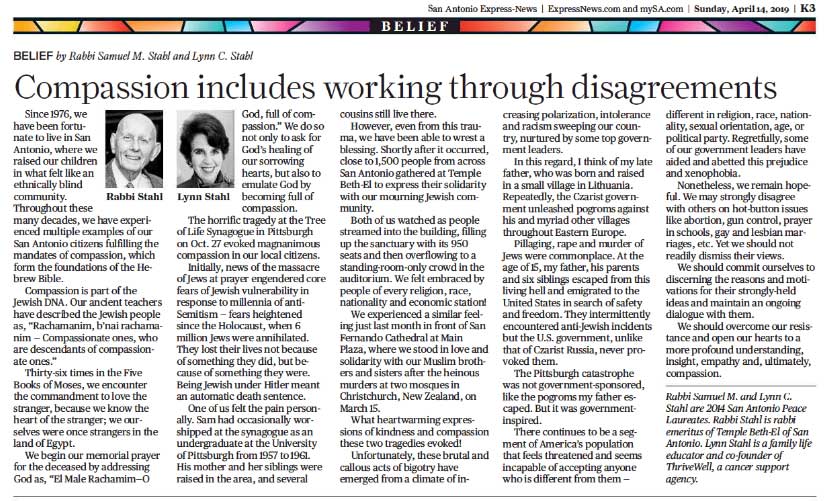 Since 1976, we have been fortunate to live in San Antonio, where we raised our children in what felt like an ethnically blind community. Throughout these many decades, we have experienced multiple examples of our San Antonio citizens fulfilling the mandates of compassion, which form the foundations of the Hebrew Bible.

Thirty-six times in the Five Books of Moses, we encounter the commandment to love the stranger, because we know the heart of the stranger; we ourselves were once strangers in the land of Egypt.

We begin our memorial prayer for the deceased by addressing God as, “El Male Rachamim—O God, full of compassion.” We do so not only to ask for God’s healing of our sorrowing hearts, but also to emulate God by becoming full of compassion.

The horrific tragedy at the Tree of Life Synagogue in Pittsburgh on Oct. 27 evoked magnanimous compassion in our local citizens.

Initially, news of the massacre of Jews at prayer engendered core fears of Jewish vulnerability in response to millennia of anti-Semitism — fears heightened since the Holocaust, when 6 million Jews were annihilated. They lost their lives not because of something they did, but because of something they were. Being Jewish under Hitler meant an automatic death sentence.

One of us felt the pain personally. Sam had occasionally worshipped at the synagogue as an undergraduate at the University of Pittsburgh from 1957 to 1961. His mother and her siblings were raised in the area, and several cousins still live there.

However, even from this trauma, we have been able to wrest a blessing. Shortly after it occurred, close to 1,500 people from across San Antonio gathered at Temple Beth-El to express their solidarity with our mourning Jewish community.

Both of us watched as people streamed into the building, filling up the sanctuary with its 950 seats and then overflowing to a standing-room-only crowd in the auditorium. We felt embraced by people of every religion, race, nationality and economic station!

We experienced a similar feeling just last month in front of San Fernando Cathedral at Main Plaza, where we stood in love and solidarity with our Muslim brothers and sisters after the heinous murders at two mosques in Christchurch, New Zealand, on March 15.

What heartwarming expressions of kindness and compassion these two tragedies evoked!

Unfortunately, these brutal and callous acts of bigotry have emerged from a climate of increasing polarization, intolerance and racism sweeping our country, nurtured by some top government leaders.

In this regard, I think of my late father, who was born and raised in a small village in Lithuania. Repeatedly, the Czarist government unleashed pogroms against his and myriad other villages throughout Eastern Europe.

Pillaging, rape and murder of Jews were commonplace. At the age of 15, my father, his parents and six siblings escaped from this living hell and emigrated to the United States in search of safety and freedom. They intermittently encountered anti-Jewish incidents but the U.S. government, unlike that of Czarist Russia, never provoked them.

The Pittsburgh catastrophe was not government-sponsored, like the pogroms my father escaped. But it was government-inspired.

There continues to be a segment of America’s population that feels threatened and seems incapable of accepting anyone who is different from them —different in religion, race, nationality, sexual orientation, age, or political party. Regretfully, some of our government leaders have aided and abetted this prejudice and xenophobia.

Nonetheless, we remain hopeful. We may strongly disagree with others on hot-button issues like abortion, gun control, prayer in schools, gay and lesbian marriages, etc. Yet we should not readily dismiss their views.

We should commit ourselves to discerning the reasons and motivations for their strongly-held ideas and maintain an ongoing dialogue with them.

We should overcome our resistance and open our hearts to a more profound understanding, insight, empathy and, ultimately, compassion.