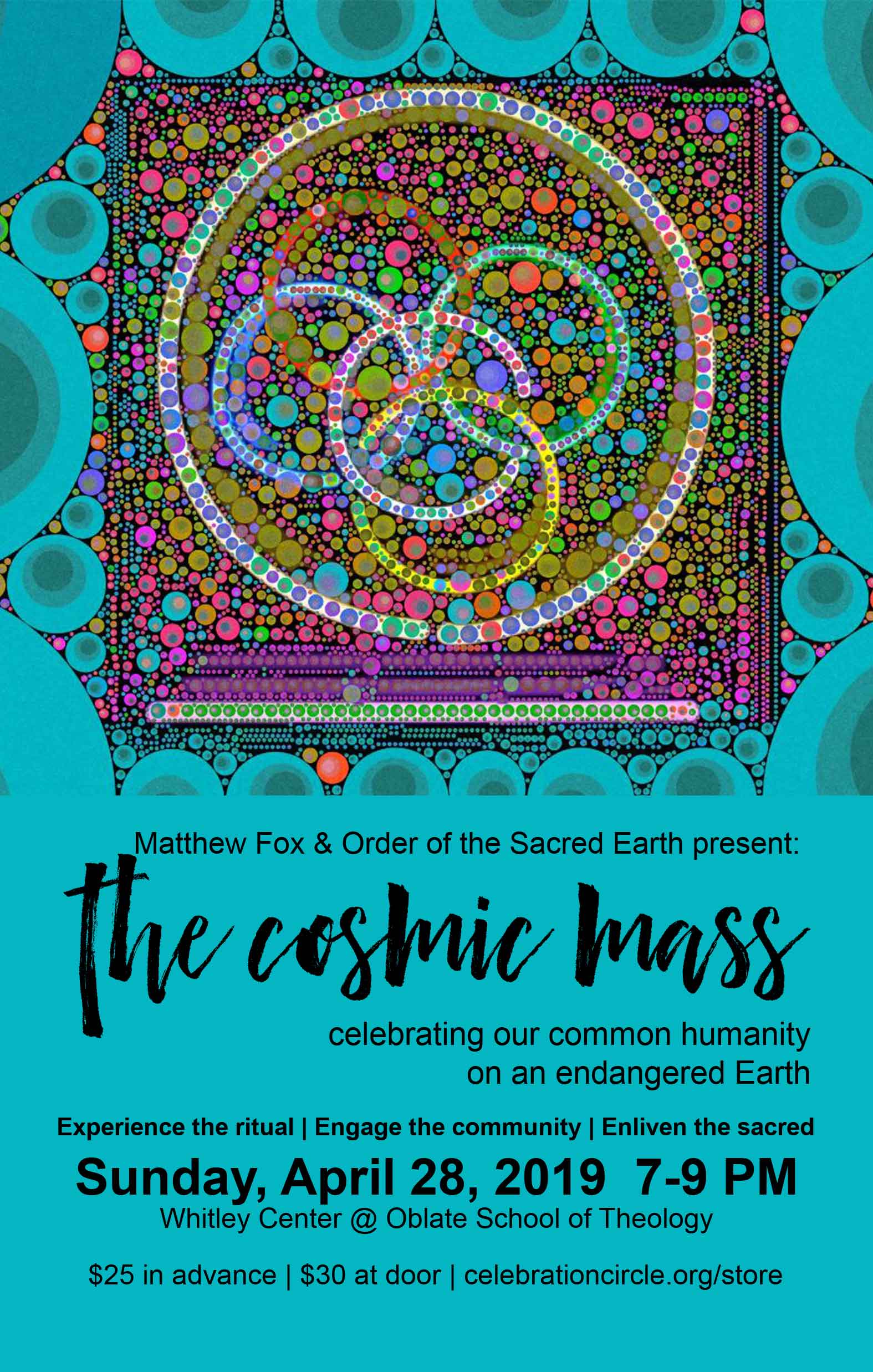 Matthew Fox, noted author and populist theologian, and his team of presenters have celebrated the Cosmic Mass in over 50 major cities throughout the world, most recently at the World Parliament of Religions in Toronto. This dynamic, experiential event is equal parts Electronic Dance Rave, sacred ritual, and an urgent call for re-examining our personal and communal relationships to the Earth in the face of global climate change.

Dr. Fox first laid out the principles for the Cosmic Mass in his book The Coming of the Cosmic Christ (1988), in which he focused on a new cosmology based on the ancient teaching of the Cosmic Christ, which was reinforced by The Reinvention of Work (1994), as well as his most recent book, Order of the Sacred Earth, which invites all those who are concerned about the pressing challenges of climate change to re-examine their personal actions and connections to the Earth through the lens of sacred ritual and reflection offered by the Cosmic Mass.

This first-ever production of the Cosmic Mass in San Antonio is being sponsored by a coalition of local environmental groups and faith-based non-profit organizations, including the Celebration Circle, Compassionate San Antonio, Green19, the peaceCENTER, and the SOL Center.

WHAT: The Cosmic Mass is a ritual celebration process which combines elements of ecstatic dance, guided meditation and sacred ritual, based on the Four Directions of the Earth (North/Via Negativa; East/Via Creativa; South/Via Positiva, West/Via Transformativa). This process is inspired by the international phenomenon of dance raves, but is also firmly grounded in the findings of leading-edge, contemporary science, as well as the ancient indigenous beliefs and the age-old contemplative faith traditions of the East and West.

WHY: The Cosmic Mass offers an inviting, inclusive and intuitive entry for those new to spirituality, while tapping into the deep resonance of ancient religious, mystical, and shamanistic teachings as well. Christian in its base, the Cosmic Mass integrates the teachings of Creation Spirituality, and has attracted Buddhists and Jews, Muslims, Pagans, Hindus, and non-believers.

The Cosmic Mass replaces pews with a dance floor and replaces reading with dancing and meditation triggered by powerful imagery and music, enhanced with DJ and VJ performances, as well as live musicians. While a brief “teaching” will be included, the printed texts of modern worship are replaced by the context of experience, employing elements of rave and sacred dance.