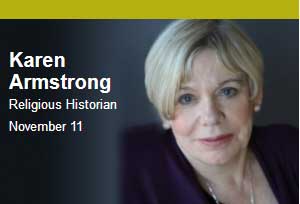 “One of the best living writers on religion” according to the Financial Times, Karen Armstrong returns to The Progressive Forum to discuss her new book, The Lost Art of Scripture: Rescuing the Sacred Texts. About her latest work, she writes, “Today we see the Quran being used by some to justify war and terrorism, the Torah to deny Palestinians the right to live in the Land of Israel, the Bible to condemn homosexuality and contraception … This narrow reading of scripture is a relatively new phenomenon … For hundreds of years, scripture was a means … to connect with the divine.” Armstrong is the author of several international bestsellers, including The History of God (1994), Muhammad: A Prophet for our Time (2007), Buddha (2004), and The Gospel According to Woman: Christianity’s Creation of the Sex War in the West (1991). Her books have been translated into 45 languages. She was awarded the TED Prize in 2008 and worked with TED to create the Charter for Compassion to restore the Golden Rule as central to religious practice. She has addressed the U.S. Congress, the World Economic Forum at Davos, and the United Nations. She is an ambassador for the United Nations Alliance of Civilization and lives in London