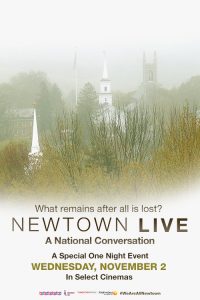 Fathom Events and Abramorama are honored to bring the story of Newtown Elementary to the big screen. Filmed over the course of three years, Newtown renders unprecedented access and never before heard testimonies to tell the aftermath of the Sandy Hook massacre which took place on December 14, 2012, the deadliest mass shooting of schoolchildren in American history. Newtown was a traumatized community fractured by grief, bonded by togetherness, and driven toward a sense of purpose. Joining the ranks of a growing club to which no one wants to belong, a cast of characters interconnect to weave an intimate story of community resilience. Patrons will also watch a live “town hall” panel moderated by CNN anchor Chris Cuomo. The conversation will engage a dialogue around the issues of gun violence, collective trauma, and community response from a number of perspectives, including survivors, law enforcement, educators, medical professionals and clergy. This event will be live from New York City for one night only on Wednesday, November 2nd. Rated PG-13.

This will be playing at the Santikos Bijou, Palladium IMAX, Silverado 16 and Rialto Brewhaus.