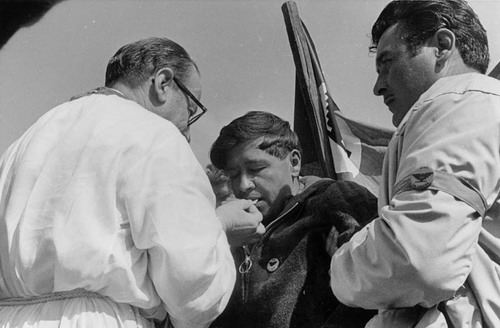 The Spirituality and Social Justice Institute at Oblate School of Theology invites you to a special symposium dedicated to César Chávez, exploring the deep connections between his faith and his pursuit of social justice. Keynote speakers will highlight his spirituality, family memories, and major influence on the development of Mexican American movements for social justice. Breakout workshops will discuss the interrelated themes of immigration, labor, ecumenical participation in the UFW movement, and non-violence.

Paul F. Chavez, President, Cesar Chavez Foundation. As a young boy in the early 1960s, Paul Chavez joined his seven brothers and sisters on weekends in Central Valley farm towns, handing out leaflets and helping his father, Cesar Chavez, organize the union that would become the United Farm Workers of America. Paul and his family endured the hardships and sacrifices of the five-year long Delano grape strike and boycott, and the struggles that followed. He has spent his entire life with the farm worker movement. Paul was a personal assistant to his father and a union organizer and negotiator. He managed the UFW’s direct marketing operation and was the union’s lobbyist in Sacramento and Washington, D.C. Since 1991, Paul Chavez has led the Cesar Chavez Foundation, also founded in the ‘60s. He spearheaded the impressive growth of the Chavez foundation, dramatically impacting the lives of farm workers, Latinos and other poor working families across the Southwest.

Nancy Piñeda-Madrid holds a Ph.D. in Systematic and Philosophical Theology from the Graduate Theological Union (Berkeley, California), a Master of Divinity from Seattle University, and a BBA from Loyola Marymount University.  For the 2018-2019 academic year, she holds the T. Marie Chilton Chair of Catholic Theology at Loyola Marymount University in Los Angeles, CA.  She is also Associate Professor of Theology and US Latinx Ministry at Boston College, where she has taught since 2005. She is the first theologian to publish a book on the evil of feminicide arguing that this tragedy demands a fresh consideration of what salvation means (Suffering and Salvation in Ciudad Juárez, Fortress Press, 2011).   In addition, she has co-edited two books Hope:  Promise, Possibility and Fulfillment, (Paulist Press, 2013) and, The Holy Spirit: Setting the World on Fire, (Paulist Press, 2017). She has published numerous articles addressing questions of soteriology, suffering, religious symbols, popular Catholicism, and Latina feminist theology.  She has given public lectures at universities across the United States as well as in Mexico, Argentina, Brazil, El Salvador, India, Vienna and Germany.  She is currently working on a book on Guadalupe as a religious symbol. She is former President of the Academy of Catholic Hispanic Theologians of the United States (ACHTUS), and former Vice President of the International Network of Societies of Catholic Theology (INSeCT).   In 2018, the Catholic Theological Society of America (CTSA) awarded her their Ann O’Hara Graff Memorial Award.  This year, she lives in Los Angeles with her husband Larry Gordon.

After teaching at Seminary of the Southwest from 1999-2015, Rev. Paul Barton, Ph.D. began his tenure at Perkins School of Theology administering two programs at the school: Director of The Hispanic/Latin@ Ministries Program and Director of Perkins Regional Course of Study School. He also serves as Professor of Christian History and Missiology As the Director of The Hispanic/Latin@ Ministries Program, Rev. Barton serves as the publisher of the journal Apuntes:  Reflexiones Teológicas desde el Contexto Hispano-Latino.  This is a journal that empowers the Hispanic/Latin@ Church by providing theological reflection from Hispanic/Latin@ perspectives.  As the Director of Perkins Regional Course of Study School, he administers a summer course of study for United Methodist local pastors and has oversight of four extension schools and two satellite schools in Texas, Arkansas, and Colorado.  The program provides a curriculum for both English and Spanish-speaking local pastors in the summer and offers courses for Spanish-speaking local pastors in Denver.

Beginning in 1975, at the UFW offices in San Juan, Texas, Rebecca Flores established a large membership among the Rio Grande valley farm workers.  With these organized farm workers, Rebecca and her committed staff provided social services where there were none; she advocated for change in state services that did not consider the special needs of farm workers, their migrancy, their poverty, their language. After being trained by the famous leader Cesar Chavez and Fred Ross, she and farm workers organized dozens of committees in the colonias of the Rio Grande valley that then fought to raise wages and working conditions in the fields; elected politicians that would introduce and fight for good farmworker legislation; and who would fund projects that would upgrade the living conditions of colonia residents, through developing an infrastructure of streets, sewage systems, street names, electricity, water, etc. From 1983 to 1988,  she helped pass legislation for workers compensation for injured farm workers, unemployment compensation, raised the Texas minimum wage, prohibited the use of the short handled hoe; provided for toilets and potable drinking water in the fields;  and passed protective Pesticide Right to Know legislation. She led annual campaigns in the Texas onion fields to raise piece rates.  She organized mushroom pickers in Florida, strawberry and grape pickers in California that resulted in a union contract. For 3 years she was State Director of the National AFL CIO.  In December 2005, Rebecca retired from her union job. Since 2014, she began to listen to the issue of the refugee mothers and children being detained in Karnes City and Dilley, Texas, and whose detention was based on the determination by the Department of Homeland Security (DHS) that they create a national security risk.  After Governor Abbot signed SB4, she with the help of 2 other women in San Antonio formed the Pro Immigrant Coalition in San Antonio, a grass roots organization with 300 members, that supports advocates for policy changes for undocumented immigrants. Along the way she raised 3 children, all intelligent and committed to justice in their work.

The Rev. Ann Helmke is the Community Faith-Based Liaison for the City of San Antonio. Rev. Helmke is an ordained Lutheran (ELCA) minister who has been serving in San Antonio community for almost 30 years. She has served in a congregational setting but her real contributions to the greater good are the net-workings between many congregations and many faiths with an emphasis on civic engagement. Ann is one of the co-founders of the San Antonio peaceCENTER, where she continues to serve in this all volunteer and interfaith organization as the animating director for over 20 years. For the past seven years she faithfully served as the first Director of Spiritual Services at Haven for Hope, a unique transformational center that directly serves in helping people transition from being without permanent shelter to a sustainable home in their lives, including a faith and spiritual home. Ann has also served as adjunct faculty at the University of the Incarnate Word and Texas Lutheran University, teaching prayer and spirituality. Her life expresses a commitment to an activated spirituality, the living dynamic between action and contemplation. Blessings in her life include two beautiful daughters, two wonderful sons-in-law, with one vivacious little granddaughter, and the most recent arrival of her grandson!

Pay What you Can

In the spirit of social justice and inclusivity, so that all might attend regardless of means, registration for this conference will be based on what you can afford. To cover costs, the suggested payment is $40. If you cannot pay $40, then pay whatever is within your means. If you are blessed with abundance, please consider paying more to offset those who cannot pay the suggested rate.