**This event has been postponed because of a scheduling conflict with one of the monks. 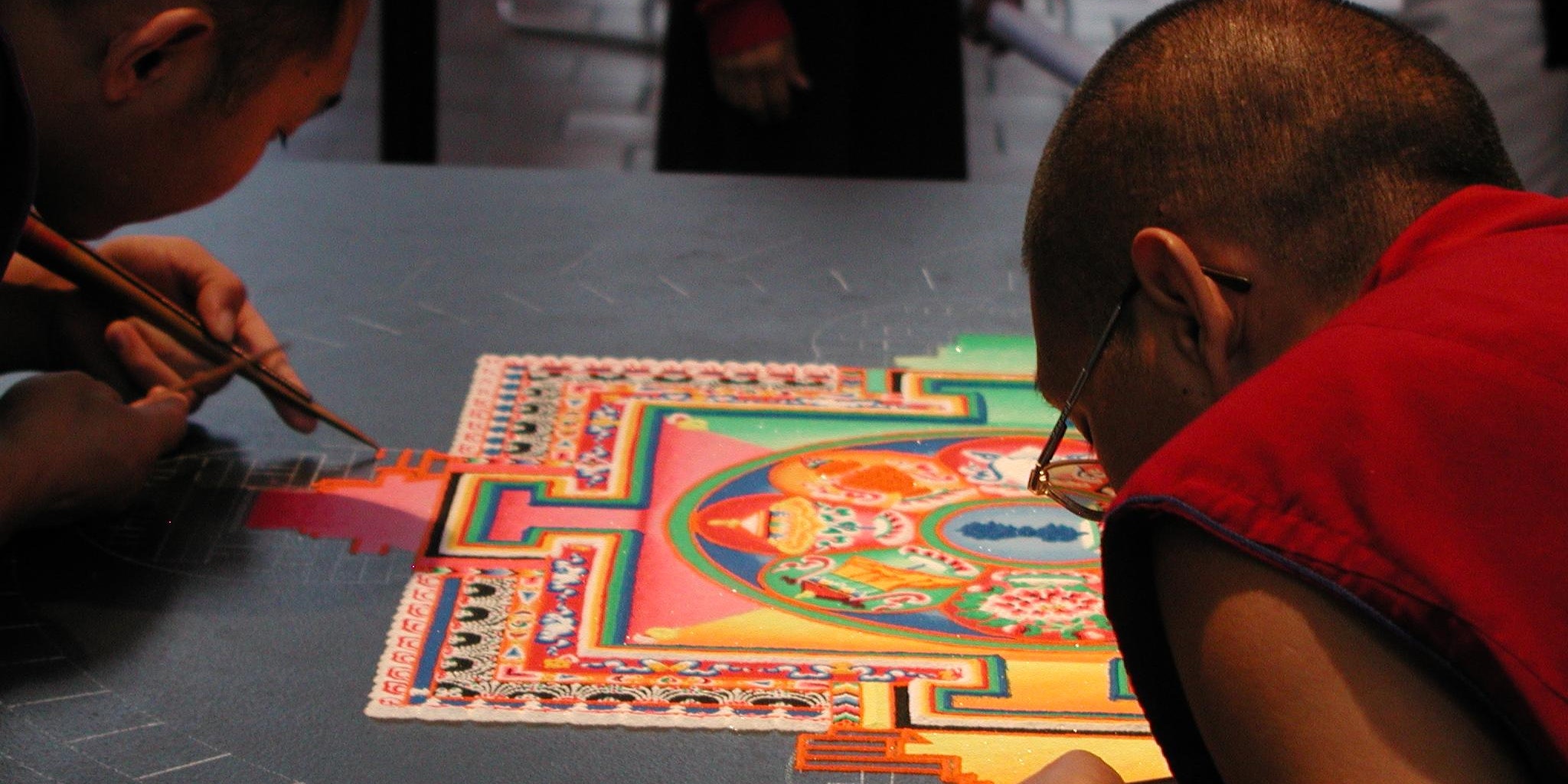 Geshe Thupten Dorjee and Ven. Yeshe Topgyal will visit San Antonio and the Tibetan Buddhism Center for World Peace to create the multicolored sand mandala of the Buddha of Compassion, Avalokiteshvara. Mandala is a Sanskrit word meaning “world in harmony,” and this form is an ancient art tradition of Tibetan Buddhism.

ABOUT
Geshe Thupten Dorjee and Ven. Yeshe Topgyal will start their work by drawing an outline of The Buddha of Compassion (Avalokiteshvara) mandala on a wooden platform. The creation of the actual sand mandala begins with an opening ceremony where the monks consecrate the site, and call forth the forces of goodness through chanting mantras accompanied by flutes, drums and cymbals. The public is invited to watch the laying of the colored sands by the monks using thin lines to create the outline and embellish the mandala drawing.

Over five days (March 20–24) millions of grains of colored sand wile be painstakingly laid into place. The sand is poured onto the mandala platform with a narrow metal funnel called a “chakpur” which is scraped by another metal rod to cause sufficient vibration for the grains of sand to trickle out of its end. The two “chakpurs” are said to symbolize the union of wisdom and compassion.

In the Buddhist tradition, sand mandalas are created whenever there is a need for healing of the environment and the living beings. From a Buddhist perspective our present age to be one of great need in this respect. Sand mandalas are deconstructed shortly after their completion — symbolizing the impermanence of all phenomenon. The sands are then swept up and placed in an urn. To fulfill the function of healing, half of the sand is distributed to the audience at the closing ceremony, while the remainder is carried to a nearby body of water, where it is deposited. The waters carry the healing blessing to the ocean, and from there it spreads throughout the world for planetary healing.

The Meaning:
The mandala is carefully constructed from sand particles to represent a particular esoteric or textual tradition of Buddhism. In this case it will be Avalokiteshvara’s mandal — the Buddha of Compassion. The tradition originated in India and was transferred to Tibet in the Middle Ages. The sand mandala is constructed as vehicle to generate compassion, realize the impermanence of reality, and to add positive healing energy into the environment.

In Tibetan Buddhism, a mandala represents a celestial palace, the abode of the deity which is envisioned during meditation. Each object in the palace has significance, representing an aspect of wisdom or reminding the meditator of a guiding principle. Scriptural texts dictate the shapes, forms, and colors of every mandala. There are many different mandalas, each with different lessons to teach and blessings to confer. Most mandalas contain a host of deities, symbolic archetypes of the landscape of the mind.

Among the Tibetan arts, painting with colored sand ranks as one of the most unique and exquisite. Millions of grains of colored sand are laid into place on a flat platform over a period of several days, forming an intricate diagram of the enlightened mind and the ideal world. In ancient times, powdered precious and semi-precious gems were also used. Thus, lapis lazuli would be used for the blues, rubies for the reds, and so forth.

In general, all mandalas have outer, inner, and secret meaning. On the outer level they represent the world in its divine form; on the inner level, they represent a map by which the ordinary human mind is transformed into the enlightened mind; and on the secret level, they predict the primordially perfect balance of the subtle energies of the body and the clear light dimension of the mind. The creation of a sand painting is said to affect purification and healing on these three levels.

Every tantric system has its own mandala, and thus each one symbolizes an existential and spiritual approach. For example, that of Lord Avalokiteshvara symbolizes compassion as a central focus of the spiritual experience; that of Lord Manjushri takes wisdom as the central focus; and that of Vajrapani emphasizes the need for courage and strength in the quest for sacred knowledge. Medicine Buddha mandalas are created to generate powers of healing.

The Sand Mandala’s main purpose is the acknowledgement of the journey toward perfection. In healing ceremonies each color corresponds to a different primary element – earth, water, fire, air and space – the fundamental building blocks of both our physical bodies and of our environment. It is said that a skilled guru can teach every aspect of the Mandala, and see the path to enlightenment within its many shapes and colors.

Philosophically, the mandala first speaks of Impermanence, nothing remains in its current state. Everything is evolving and changing all the time, everyone knows this concept, but few can understand it to the fullest. The second concept is Emptiness, Shunyata—nothing exsists from its own side. Consciousness and the physical world are ever evolving and changing. The Sand Mandala captures all of these ideas in a beautifully radiant artwork that substitute for hundreds of books in the way of learning.