Golden Rule to be held up as a shining example 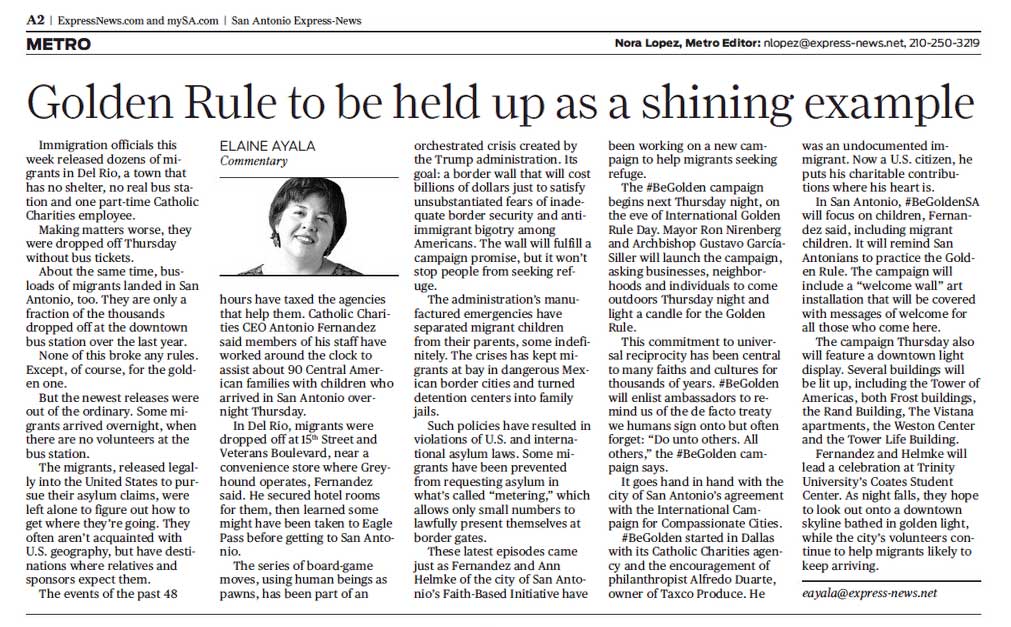 Immigration officials this week released dozens of migrants in Del Rio, a town that has no shelter, no real bus station and one part-time Catholic Charities employee.

Making matters worse, they were dropped off Thursday without bus tickets.

About the same time, bus-loads of migrants landed in San Antonio, too. They are only a fraction of the thousands dropped off at the downtown bus station over the last year.

None of this broke any rules. Except, of course, for the golden one.

But the newest releases were out of the ordinary. Some migrants arrived overnight, when there are no volunteers at the bus station.

The migrants, released legally into the United States to pursue their asylum claims, were left alone to figure out how to get where they’re going. They often aren’t acquainted with U.S. geography, but have destinations where relatives and sponsors expect them.

The events of the past 48 hours have taxed the agencies that help them. Catholic Charities CEO Antonio Fernandez said members of his staff have worked around the clock to assist about 90 Central American families with children who arrived in San Antonio overnight Thursday.

In Del Rio, migrants were dropped off at 15th Street and Veterans Boulevard, near a convenience store where Greyhound operates, Fernandez said. He secured hotel rooms for them, then learned some might have been taken to Eagle Pass before getting to San Antonio.

The series of board-game moves, using human beings as pawns, has been part of an orchestrated crisis created by the Trump administration. Its goal: a border wall that will cost billions of dollars just to satisfy unsubstantiated fears of inadequate border security and anti-immigrant bigotry among Americans. The wall will fulfill a campaign promise, but it won’t stop people from seeking refuge.

The administration’s manufactured emergencies have separated migrant children from their parents, some indefinitely. The crises has kept migrants at bay in dangerous Mexican border cities and turned detention centers into family jails.

Such policies have resulted in violations of U.S. and international asylum laws. Some migrants have been prevented from requesting asylum in what’s called “metering,” which allows only small numbers to lawfully present themselves at border gates.

These latest episodes came just as Fernandez and Ann Helmke of the city of San Antonio’s Faith-Based Initiative have been working on a new campaign to help migrants seeking refuge.

The #BeGolden campaign begins next Thursday night, on the eve of International Golden Rule Day. Mayor Ron Nirenberg and Archbishop Gustavo García-Siller will launch the campaign, asking businesses, neighborhoods and individuals to come outdoors Thursday night and light a candle for the Golden Rule.

This commitment to universal reciprocity has been central to many faiths and cultures for thousands of years. #BeGolden will enlist ambassadors to remind us of the de facto treaty we humans sign onto but often forget: “Do unto others. All others,” the #BeGolden campaign says.

It goes hand in hand with the city of San Antonio’s agreement with the International Campaign for Compassionate Cities.

#BeGolden started in Dallas with its Catholic Charities agency and the encouragement of philanthropist Alfredo Duarte, owner of Taxco Produce. He was an undocumented immigrant. Now a U.S. citizen, he puts his charitable contributions where his heart is.

In San Antonio, #BeGoldenSA will focus on children, Fernandez said, including migrant children. It will remind San Antonians to practice the Golden Rule. The campaign will include a “welcome wall” art installation that will be covered with messages of welcome for all those who come here.

The campaign Thursday also will feature a downtown light display. Several buildings will be lit up, including the Tower of Americas, both Frost buildings, the Rand Building, The Vistana apartments, the Weston Center and the Tower Life Building.

Fernandez and Helmke will lead a celebration at Trinity University’s Coates Student Center. As night falls, they hope to look out onto a downtown skyline bathed in golden light, while the city’s volunteers continue to help migrants likely to keep arriving.