Hoping for interreligious dialogue to become way of life 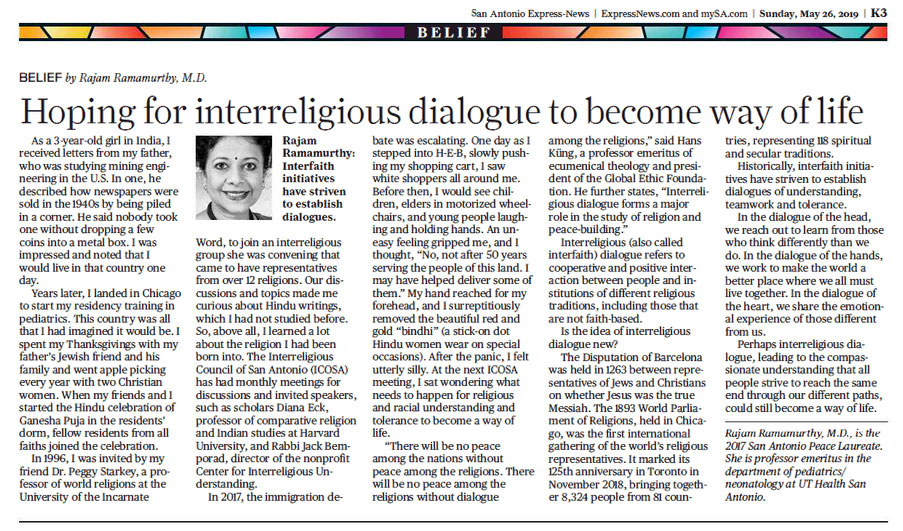 As a 3-year-old girl in India, I received letters from my father, who was studying mining engineering in the U.S. In one, he described how newspapers were sold in the 1940s by being piled in a corner. He said nobody took one without dropping a few coins into a metal box. I was impressed and noted that I would live in that country one day.

Years later, I landed in Chicago to start my residency training in pediatrics. This country was all that I had imagined it would be. I spent my Thanksgivings with my father’s Jewish friend and his family and went apple picking every year with two Christian women. When my friends and I started the Hindu celebration of Ganesha Puja in the residents’ dorm, fellow residents from all faiths joined the celebration.

In 1996, I was invited by my friend Dr. Peggy Starkey, a professor of world religions at the University of the Incarnate Word, to join an interreligious group she was convening that came to have representatives from over 12 religions. Our discussions and topics made me curious about Hindu writings, which I had not studied before. So, above all, I learned a lot about the religion I had been born into. The Interreligious Council of San Antonio (ICOSA) has had monthly meetings for discussions and invited speakers, such as scholars Diana Eck, professor of comparative religion and Indian studies at Harvard University, and Rabbi Jack Bemporad, director of the nonprofit Center for Interreligious Understanding.

In 2017, the immigration debate was escalating. One day as I stepped into H-E-B, slowly pushing my shopping cart, I saw white shoppers all around me. Before then, I would see children, elders in motorized wheelchairs, and young people laughing and holding hands. An uneasy feeling gripped me, and I thought, “No, not after 50 years serving the people of this land. I may have helped deliver some of them.” My hand reached for my forehead, and I surreptitiously removed the beautiful red and gold “bindhi” (a stick-on dot Hindu women wear on special occasions). After the panic, I felt utterly silly. At the next ICOSA meeting, I sat wondering what needs to happen for religious and racial understanding and tolerance to become a way of life.

Interreligious (also called interfaith) dialogue refers to cooperative and positive interaction between people and institutions of different religious traditions, including those that are not faith-based.

Is the idea of interreligious dialogue new?

The Disputation of Barcelona was held in 1263 between representatives of Jews and Christians on whether Jesus was the true Messiah. The 1893 World Parliament of Religions, held in Chicago, was the first international gathering of the world’s religious representatives. It marked its 125th anniversary in Toronto in November 2018, bringing together 8,324 people from 81 countries, representing 118 spiritual and secular traditions.

Historically, interfaith initiatives have striven to establish dialogues of understanding, teamwork and tolerance.

Perhaps interreligious dialogue, leading to the compassionate understanding that all people strive to reach the same end through our different paths, could still become a way of life.

Rajam Ramamurthy, M.D., is the 2017 San Antonio Peace Laureate. She is professor emeritus in the department of pediatrics/ neonatology at UT Health San Antonio.