HOW WE CAME TO BE OLD

In 2008, Karen Armstrong won a prestigious TED Prize, and made her wish: a Charter for Compassion with the Golden Rule at it’s center. Watch her talk: 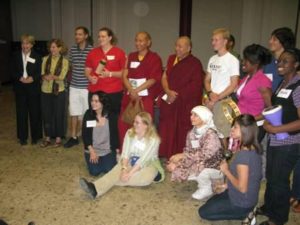 Although the Charter for Compassion was being thought about and discussed, nothing really happened in San Antonio until April 2012, when Pax Christi Texas, the Catholic peace organization, decided to hold its annual state conference in San Antonio — an INTERFAITH conference! — with the theme “Where in the World is Compassion?”

More than 300 people attended. Sarwat Husain, Vice-Chair of the National Council on American Islamic Relations, received the Texas Pax Christi Peacemaker of the Year Award from Karen Ball, President of Pax Christi San Antonio. (Photo by Chuck Gibbons) In presenting the award, Karen said Husain “promotes peace in the face of misunderstanding, opposition, bitterness, and threat of violence” and is “motivated to serve the needs of ones who need help and do her part to make this world a better place to live for all.”

Sarwat went on to say: “We [all] have to seek common ground and respect our differences as we labor together toward a more civil society.” Georgetown University professor Dr. John Esposito, author of “Who Speaks for Islam, What a Billion Muslims Really Think,” was the keynote speaker at the conference.

After the conference many were eager to work for the Charter — but how? The peaceCENTER began nurturing a network of people interested in promoting the Charter, hoping that a leader with a passion for compassion would emerge from the ever-growing list of people and organizations. We called this network CompassionNET. A banner was made and carried at the 1st annual Partnership Walk hosted by the Aga Khan Foundation, in October 2012. A big paper copy of the Charter — which was signed by those attending the Pax Christi conference — was taken to events around San Antonio and signatures added. It started getting tattered — so a 3’x6′ vinyl version was created. Towards the end of the year the peaceCENTER facilitated a book study of Karen Armstrong’s “Twelve Steps to a Compassionate Life.” at Viva! Book Store.

After a period of discernment, the peaceCENTER Core Team decided that we were the people we had been waiting for, took up the banner of CompassionNET, and became the official organizers the grassroots movement to have San Antonio recognized as a world-class compassionate city.

The campaign was launched on January 27, during the 8th annual Blessing of the Peacemakers. Sr. Martha Ann Kirk (who was instrumental in the original 2009 signing of the Charter and in the development of the 2012 Pax Christi Texas conference) and the Sisters of Charity of the Incarnate Word were named the San Antonio 2013 Peace Laureates.

The Blessing of the Peacemakers was the first stop in a Pilgrimage of Compassion. We’ve had an interfaith panel discussion on Compassion at Oblate School of Theology in February, 2013, immediately followed by a 12-week book study at Oblate, for which 45 people signed up. A day-long sacred dance workshop, Incarnating Compassion, was held at UIW in March, then two evenings of compassionate hospitality in the Asian traditions at the SoL Center AND the Walk to End Genocide in April. In May we met with the Turkish community at the Institute for Interfaith Dialogue for an dialogue and dinner about compassion in sacred scripture AND with the Baha’is to learn about the challenges facing young people of their faith in getting an education in Iran. Something was scheduled for every month of the year.

In May, 2013 the peaceCENTER’s Ann Helmke and Susan Ives attended the International Summit on Compassionate Organizations in Louisville, KY. Here we got the information and support we needed to take the next step. This Web site was launched and the process of growing CompassionNET by formally signing up partners began.

IT IS JUST BEGINNING

The next chapter of this history requires YOU. Become a part of compassionNET — as an individual or an organization — and play a role in having San Antonio recognized as a world-class compassionate city — the HEART of Texas.