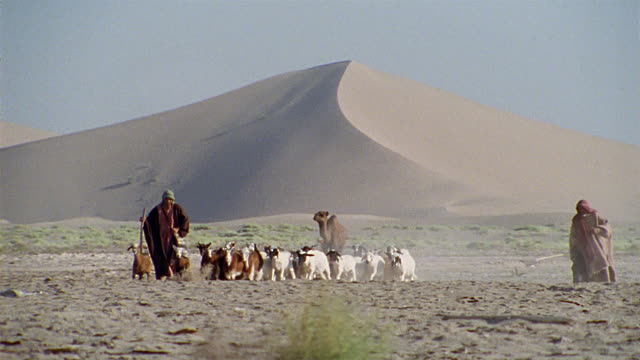 Next to his implicit faith in Allah’s Providence, Ibrahìm was chiefly noted for his hospitality. He used often to say, “I was a poor penniless outcast and fugitive, but Allah cared for and enriched me. Why, therefore, should not I, in my turn, show kindness to my fellow-men?”

He had a hall built in which there was a table set, ready for the refreshment of any hungry wayfarer, as well as new garments for such as were in rags. Before taking his own meals, he was wont to go forth out of his camp to the distance of one or two miles, in hopes of meeting guests to keep him company.

In spite of his liberality, he was not impoverished, but actually grew richer by Allah’s blessing. One year there was a sore famine in the land, and the Patriarch sent his servants to a friend he had in Egypt, asking the latter to send him a supply of corn. The false friend, thinking that he had now an opportunity for ruining the Friend of Allah, answered that, had the grain been wanted for the use of Ibrahìm and his own household and no others, he would have gladly furnished it, but that as he knew that the food, which was so scarce all the world over that year, would only be wasted on vagabonds and beggars, he felt that he would be doing wrong to send any.

Ibrahìm’s servants, very loyal to their master, were ashamed of being seen returning to his camp with empty sacks, so they filled them with fine white sand, and, reaching home, related what had happened. The Patriarch was much grieved at his friend’s treachery and, whilst thinking on the matter, he fell asleep. While he slept, Sarah, who knew nothing of what had occurred, opened one of the sacks and found it full of the most beautiful flour, of which she made bread. Thus, when earthly friends failed, Allah succoured El-Khalìl.

Being so hospitable himself, Ibrahìm could not understand how others could be the contrary. One day he was obliged to leave his tents and visit a distant part of the country where some of his flocks were pasturing in the charge of shepherds. On reaching the place where he had expected to find them, he was told by a certain Bedawi that they had gone to other pastures a good way off. He therefore accepted the Arab’s invitation to enter his tent and rest awhile. A kid was killed to furnish a repast.

Some weeks later, El-Khalìl had again occasion to go the same way and met the same Bedawi, who, in answer to his inquiry as to the whereabouts of his shepherd, answered: “So many hours north of the place where I killed a kid for thee.” Ibrahìm said nothing, but passed on his way.

Not long after this he had occasion to make a third journey and, on meeting the Bedawi, the latter told him that the flocks he was seeking were at such a distance south of “the place where I killed a kid for thee.”

The next time El-Khalìl met the man, he told him that the sheep were so and so far east of the place where that precious kid had been killed. “Ya Rabbi, O my Lord,” exclaimed Ibrahìm, past patience, “Thou knowest how ungrudgingly I exercise hospitality without respect of persons. I beseech Thee, therefore, that as this man is constantly throwing his wretched kid in my teeth, I may be enabled to vomit it out, even though it be so long a time since I partook thereof.” The prayer received an instant answer, and the slaughtered kid was restored alive and whole to its churlish owner.