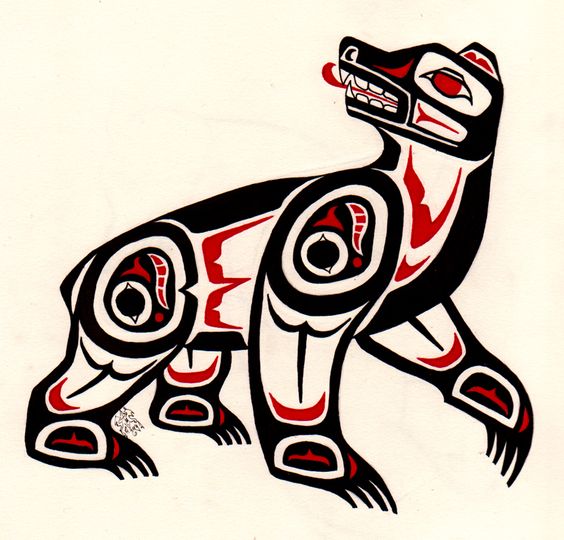 A Tlingit Folk Tale from Alaska

A An old man living in Alaska had lost all of his friends and family, and he felt sad to think that he was left alone. He began to wonder whether he should leave and start a new life in another village. But he worried, “If I paddle away to another village and the people there see that I am alone, they may think that I’ve run away from my own village because I was accused of some disgraceful thing.” Instead, he thought that he would go off by himself into the forest.

While this man was traveling along the woods the thought occurred to him to go to the bears and let the bears kill him. The village was at the mouth of a large salmon creek, so he went over to the creek early in the morning until he found a bear trail and lay down across the end of it. He thought that when the bears came out along this trail they would find and kill him.

By and by, as he lay there, he heard the bushes breaking and saw a large number of grizzly bears coming along. The largest bear led the rest, and the tips of his hairs were white. Then the old man became frightened. He suddenly realized he did not want to die a hard death and imagined himself being torn to pieces among the bears. So when the leading bear came up to him, he stood up and announced: “I have come to invite you to a feast.”

At that the bear’s fur stood straight up, and the old man thought that he was done for, but he spoke again saying, “I have come to invite you to a feast, but if you are going to kill me, I am willing to die. I am alone. I have lost all of my family, my property, and my friends.”

As soon as he had said this the leading bear turned about and whined to the bears that were following. Then he started back and the rest followed him. Afterward the man got up and walked toward his village very fast. He imagined that the biggest bear had told his people to go back because they were invited to a feast.

When he got home he began to clean up. The old sand around the fireplace he took away and replaced with clean sand. Then he went for a load of wood. When he told the other people in that village what he was doing and why, they were all very much frightened and said to him, “What made you do such a thing? The grizzlies are our enemy.” After that the man took off his shirt, and painted himself up, putting stripes of red across his upper arm muscles, a stripe over his heart, and another across the upper part of his chest.

Very early in the morning, after he had thus prepared, he stood outside of the door looking for his bears. Finally he saw them at the mouth of the creek, led by the same big grizzly bear. When the other village people saw them, however, they were so terrified that they shut themselves in their houses. But the old man stood by his door to receive them. Then he brought them into the house and gave them seats, placing the chief in the middle at the rear of the house and the rest around him.

First he served them large trays of cranberries preserved in grease. The large bear seemed to say something to his companions, and as soon as he began to eat the rest started. They watched him and did whatever he did. The host followed that up with other kinds of food, and, after they were through, the large bear seemed to talk to him for a very long time. The man thought that he was delivering a speech, for he would look up at the smoke hole every now and then and act as though he were talking. When he finished he started out and the rest followed. As they went out each in turn licked the paint from their host’s arm and breast. The old man felt as though they were licking his sorrow away.

The day after all this happened the smallest bear came back in human form, and spoke to the old man in his native language, Tlingit. He had been a human being who was captured and adopted by the bears. This bear-man asked the old man if he had understood their chief, and he said, “No.”

“He was telling you,” the bear-man replied, “that he is in the same condition as you. He, too, is old and has lost all of his friends. He had heard of you before he saw you. He told you to think of him when you are mourning for your lost ones.”

When the man asked this person why he had not told him what was said the day before, he replied that he was not allowed to speak his native language while the chief was around.

It was on account of this adventure that henceforth the old people, whenever they killed a grizzly bear, would paint stripes across its skin. Also, when they gave a feast, no matter if a person were their enemy, they would invite him to the feast and become friends just as this old man did with the bears.