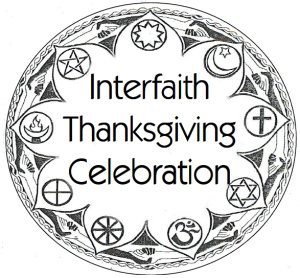 I look forward to my weekly e-mail from Interfaith Paths to Peace, in Louisville, Kentucky, which includes a three-minute weekly insight from Spirituality U. (And how cool is that? Three minutes. Spiritual insight. Spirituality U.) This week’s insight from director Terry Taylor made me smile:

I think Thanksgiving is THE Interfaith holiday in America. Here’s why. Thanksgiving incorporates two powerful elements common to all religions: shared food and expressed gratitude. Let me explain the food part first.

I like to explore what I call the “core mythology” of religions. As part of my exploration, I once told a Jewish friend that I thought the core myth of Judaism was “exile and return.” She said, “That’s almost right; it’s actually, exile and return…Let’s go eat.”

I instantly had an epiphany: shared food is a key element of ALL religions; e.g., Jesus died for our sins…let’s go eat; there is no god but God and Muhammad is his Prophet…let’s go eat. And so on and so on. Moreover, I have learned by experience that one of the most useful tools in interfaith work is a meal shared among folks from different religions.

And here are a few observations about food at the first Thanksgiving in 1621. Compared with our contemporary menu of traditional items, we might be surprised to learn that the Pilgrims and Native Americans may have munched on such exotic foods as lobster, swan and even seal meat. We might be just as surprised to learn that the first menu didn’t include such Thanksgiving staples as pumpkin pie, ham, sweet potatoes, or cranberry sauce!

These days, in addition to turkey and dressing and pumpkin pie, the menu may include Middle Eastern hummus, Indian pekoras and even Japanese sushi. Because Chanukah starts on Thanksgiving this year the table may also include potato pancakes and soufgoniot (jelly doughnuts). And the gathering for dinner in a household may include Christians and Muslims, Hindus and Jews, Buddhists and Baha’is.

It is appropriate to note that the idea of devoting a day to Thanksgiving isn’t uniquely American. A number of countries around the world celebrate some kind of thanksgiving day or festival. Canada observes Thanksgiving in October. Among the other nations that observe some form of national gratefulness are: China, Israel, Brazil, South Korea and India.

The spirit of thanksgiving is infused with gratitude (as the name implies). A close examination of just about every religion reveals that one of their common spiritual practices is an expression of gratefulness. The monk David Steindl-Rast reminds us that gratefulness is in fact the heart of prayer. The first Thanksgiving was offered as a consumable prayer in gratitude for the community’s survival of a long and painful winter and a scorching summer. That first Thanksgiving reminds us to express gratitude even when things aren’t going well in our individual lives or the world around us.

It wasn’t until we were in the midst of our horrible Civil War that Thanksgiving Day became a national event. President Lincoln in 1863 called on Americans to observe a Thanksgiving Day in November each year. Thanksgiving is celebrated on the final Thursday in November, but during the Great Depression, President Roosevelt tried to move the observance up a week (as a way of stimulating the sputtering pre-Christmas economy). But there was such an uproar that, Thanksgiving was returned to its original place on the calendar. Score: gratefulness one; shameless commerce zero.